Get your greens for breakfast - 3 easy breakfast sandwiches

Get Your Greens for Breakfast 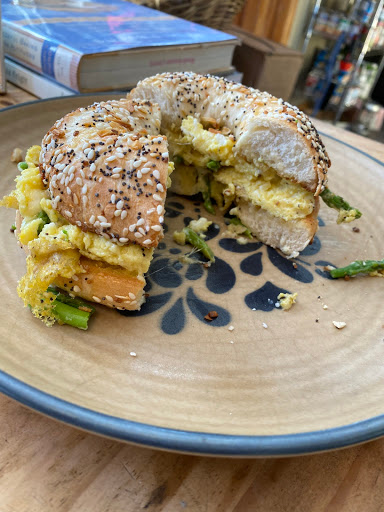 I’m one of those adults who isn’t a natural salad eater. If I want to eat my veggies, I resort to tactics that might be worthy of a clever mom with a recalcitrant toddler.

Recently though, I found inspiration in a delicious raw veggie and hummus sandwich on focaccia from Soupz-On takeout in Breckenridge. It was like eating a salad between two slices of fresh garlicky bread. I love bread as much as chocolate, so I was very happy.

If you’re like me and always looking for a way to sneak more fresh vegetables into your diet, allow me to share three quick and easy breakfast options to start your day. The secret is to pile on the vegetables. Not a single wilted lettuce leaf, I’m encouraging a pile of mixed vegetables that’s at least as thick as the two slices of bread.

Experiment with the variety of vegetables you use. I’ve now begun piling my lunchtime turkey or roast beef sandwich with grated carrots, spinach, mushrooms, cucumbers, slices of roasted peppers or eggplant. The possibilities are exciting!

And now a plea. Two of these breakfast options include bagels. I’d like to put out a call to Breckenridge bakers…would someone please open a bagel shop?!

The name says it all, you’ll enjoy Omega 3 fatty oils from the smoked salmon, and you’ll be a strong as Popeye when you pile your own choice of greens.

Slice in half and lightly toast an Everything bagel.

Slater one side with cream cheese. Top with smoked salmon.

Next layer with fresh baby spinach and thin slices of cucumber and green onion.

Another Everything Bagel with an Omelet

It’s been said that the sandwich was invented by a medieval earl to hold his supper between two slices of bread as he rode his horse. Similarly, here we have an omelet between two halves of a toast bagel.

Slice and toast a bagel. (I like to butter the bagel halves and place them under a broiler.) Whisk together two eggs and a splash of milk (or half and half). Into a small frying pan add a tablespoon of olive oil and heat over a medium heat, until the oil shimmers, then add the eggs. Don’t disturb the eggs until you see that the edges are set. Then gently place a handful of your favorite steamed veggies on top of the eggs. I used 3-minute steamed asparagus. Using a spatula, gently fold the eggs over and allow them to cook. I won’t mind if you add a ¼ cup of your favorite grated cheese before you place the omelet on the bagel.

Spinach, Mushroom, and Cheddar frittata – without a bagel

No bagel here, which is probably a relief to my GP who wants me to lose 25 pounds.

Preheat the oven to 350F. In a small frying pan, add a Tablespoon of Extra Virgin Olive oil and allow to heat on a medium heat until the oil just shimmers. Meanwhile, whisk together two eggs and a splash of milk or half and half. Into the oil, add a handful of baby spinach leaves and sliced portabella mushrooms. Quickly sauté until the spinach and mushrooms are just wilted. Pour the egg mixture over the spinach and mushrooms, add a ¼ cup of grated cheese. Place into the oven until the egg custard is just set.