Your No Stress, Go Skiing in the Morning, Three-Hour Thanksgiving Dinner 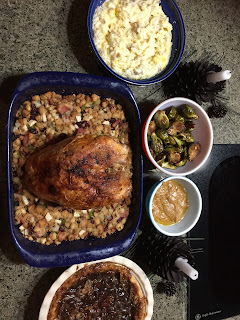 This week my Facebook newsfeed brought me a post from New York Times Food: The Eight-Hour Thanksgiving Dinner. The website included classic recipes, glossy, well-produced videos, and the promise that you would even have time to sit down and have lunch during the eight hours of cooking. All of which sounded promising until I did the math.

If I assumed sitting down for dinner at four o’clock and worked backward from there, I’d have to start cooking at eight a.m. and then spend the next eight hours mostly on my feet chopping and stirring and using every pan in the kitchen. Which might be okay, given my TV line up for Thanksgiving mornings: the Macy’s Thanksgiving Day parade, followed by the Purina National Dog Show, which always sends me to the digital archives to watch one of my favorite movies: Best in Show, and then football. Since I know nothing about football this is mostly for background noise.

Even with this entertaining line-up viewed from behind my kitchen island, even with friends popping in to offer support, even fortified with a glass or two of wine, by the end of eight hours of intense cooking, the only thing I’d be ready for is a nap, not a holiday meal with friends.

And yet! I am not suggesting restaurant reservations or purchasing a pre-made Thanksgiving dinner. Never! Instead, I encourage you to relax and enjoy cooking for friends and family. To prove this is possible, I gave myself the challenge of creating a delicious Thanksgiving dinner in three-hours.

I started cooking at three and sat down to dinner with friends at six o’clock. There’s a caveat, I cooked a five-pound turkey breast, instead of a whole turkey, which is perfect if you are planning Thanksgiving for four to six guests. The other secret is to have all your ingredients assembled when you begin so time is not wasted searching for them.

For appetizers, I suggest my favorites: shrimp cocktail or a simple platter of three cheeses, grapes, and crackers, or fresh vegetables and a cold dip of your choice, all of which can be store-bought.

I’m listing the recipes in the order that you’ll want to make them, based on their cooking time. All the recipes were made in one 350F oven. The turkey went in first and remained for the entire three hours. The other dishes were rotated in and out, just as you would open the oven door to baste the turkey. Now, let’s get cooking.

Roasted Turkey Breast
1 – thawed or fresh turkey breast
1 – teaspoon poultry seasoning
4 tablespoons butter
salt and pepper
Preheat oven to 350F
If you buy your turkey a day or two before, I strongly suggest brining it in buttermilk for 24 to 48 hours. When you’re ready to cook the bird, wipe the buttermilk off turkey, pat dry, and place in a roasting pan. Tuck slabs of butter under the skin of the turkey and rub the remaining butter over the skin of the bird. Season the skin with salt, pepper, and poultry seasoning, also season the cavity of the bird. Place the bird in the pre-heated oven.

Rustic Garlic Mashed Potatoes
3 lbs. russet potatoes cut into chunks (I leave the skin on but you can peel the potatoes)
5 cloves of garlic, skins removed
1 stick of butter
1 cup of half and half
salt and pepper to taste
These mashed potatoes are rustic because they are mashed with a simple hand masher which leaves them lumpy, and because I leave the skins on the potatoes. Both choices give the potatoes a homey, not gluey, texture. I boil the cloves of garlic with the potatoes giving the garlic a wonderfully mild taste. The potatoes and garlic are boiled in a pot of salted water until the chunks of potato are easily pierced with a knife. Drain the potatoes and garlic, return them to their cooking pot and stovetop to allow any remaining water to evaporate. Add the butter, half and half, and roughly mash the potatoes and garlic, then add salt and pepper to taste. You can finish the mashed potatoes with a scraping of your favorite hard cheese.

Pan Gravy
¼ cup flour
water or chicken stock 1 cup or more as needed
Remove the turkey breast from the pan, but leave the drippings in the pan and move the pan to the stovetop. Sprinkle the flour into the pan, and using a whisk, allow the flour to cook and disintegrate into the pan drippings. Add water or stock in a stream, continuing to whisk the gravy until it reaches the consistency you like. Add salt and pepper to taste.