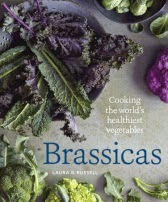 BRASSICAS by Laura Russell, is described as 'cooking the world's healthiest vegetables. I would describe it as a practical, entry-level cookbook that will encourage you to add these vegetables to your weekly cooking menus.

For this review, I tried out Laura's recipe for broccoli frittata with pepper jack cheese. In addition to the broccoli, I added mushrooms and some mixed 'super greens' (which included kale, spinach, and arugula) that I had in the 'fridge. The frittata turned out beautifully and was part of a simple and easy brunch to share with a friend who'd stopped by the house.

I'm looking forward to trying out Laura's recipes for 'charred brussels sprouts with pancetta and fig glaze', the 'red curry soup with broccoli and shrimp', but especially, 'broccoli rabe with romesco sauce'...since broccoli rabe is one of my favorite leafy vegetables.

I recommend these straightforward, tasty recipes in this cookbook for anyone who wants to expand the variety and taste of the vegetables they serve in every meal.

Brassicas is filled with beautiful photographs of many of the dishes as well as charming narration that explains the origin of the dish. My only wish is that the book was published in trade paperback rather than hardback.