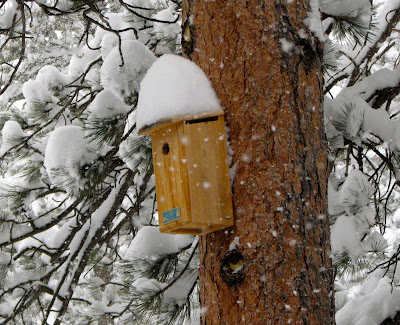 We woke up to two feet of snow this morning, so we weren't going anywhere.
Mom suggested waffles were in order to celebrate our first snow day in at least two weeks or has it been over a month? 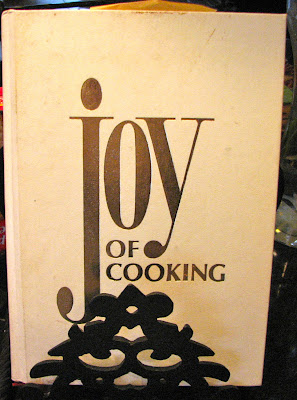 Since I didn't have any pre-made mix on hand, I looked up a recipe in my 1982 edition of the Joy of Cooking and then created a recipe of my own. Whenever I find myself in this situation, where I have to create something from scratch instead of using a prepared food-mix, I think of my brother John telling me: "Necessity is the Mother of Invention." Which I took as his way of saying, 'it's good to know how to do stuff for yourself.' 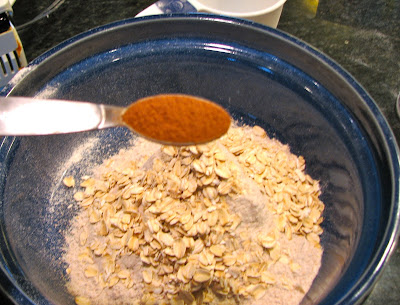 Instead of using cake flour, as Joy recommended, I used whole wheat flour and oatmeal, because oatmeal is good for Mom's cholesterol, but she refuses to eat a bowl of cooked oatmeal. Hence my strategy of sneaking it into other things like waffles and cookies.

Then I added baking powder and apple pie spice, although you could add cinnamon, or pumpkin pie spice, or any other flavor that strikes your fancy. And a teaspoon of sugar...although I bet you could also just skip the sugar altogether without it making a difference to the taste. I'll try that next time, as I'm trying to cut down on sugar in my diet. 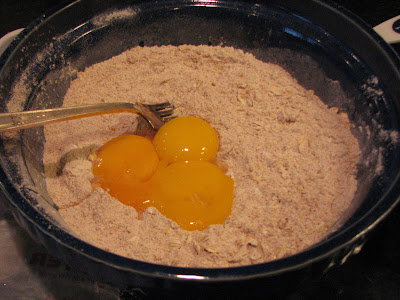 Now add the wet ingredients: three egg yolks (aren't they beautiful!) and then milk (or buttermilk would be wonderful). 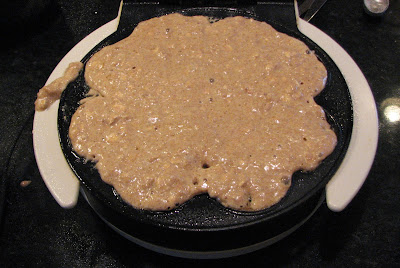 A few vigorous beats, the batter will be thick, and then gently ladle into the waffle maker and spread out over the surface. And try not to make the mess that I create with batter falling over the edges. 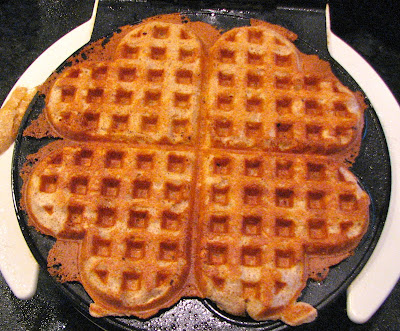 This Black and Decker waffle maker, which I've had for years, actually chirps when the waffles are done. And it makes adorable heart shaped waffles.

Serve with bacon or sausage, to get that savory / sweet hit, and a splash of maple syrup. Yum!

1 teaspoon sugar (omit if you're watching your sugar intake)