How to Re-Launch Your Novel 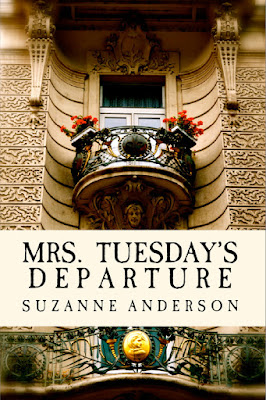 I first published Mrs. Tuesday's Departure as an ebook on Amazon's Kindle a little over a year ago. It went well. But as the year went on, I felt that the book was not as good as it could have been. Which inspired me to take advantage of an ebook's fluidity, to make some changes and plan it re-launch.

This post will give you an overview of the myriad events involved in this process. Later I'll delve into some of these areas in greater depth to provide you with more information, so you may be inspired.

Mrs. Tuesday's Departure, in its original form, was quite a bit different from the book I published in some important ways:

First it was written in the First Person Point of View, which gave it a much more intimate feel, which as it turns out, was the right POV for a story about a family experiencing the most terrifying moments of war.

Second, it was actually set in Budapest, Hungary during World War Two, not in the fictional other-world it was thinly disguised as.

And finally, it had a spiritual element that explored a particular element of religious faith that has always perplexed me....the challenge of believing in something we cannot see.

With that in mind, a few months ago, I resurrected the original manuscript and set to work dusting it off and making a few changes, hopefully clearing up things that in reviews of the first Mrs. Tuesday release had caused consternation for some readers.

Then I decided to re-design the cover of the book. And with your help I finally decided on the cover you see at the top of this post. By the way, thank you for your invaluable input. It really did make a difference.

To create this cover I used the 'Cover Creator' on CreateSpace.com, which was part of the process of creating the new paperback version of Mrs. Tuesday which will also be launching in the next week or so....more on that later.

I wanted to make sure my ebook read like a professionally produced book, and not something I tossed online from a Word file (which is pretty much what my first book looked like). So I hired Lani Rich Davis from Storywonk.com to handle the formatting of the different file formats for Kindle, Barnes & Noble, and Smashwords, as well as the paperback version for CreateSpace.

Lani and I had a wonderful time and quickly developed a terrific working relationship, made possible by her incredible patience when I went through my book cover melt down, which lasted about two weeks.

And the beautiful interior that she created for the paperback version of Mrs. Tuesday is truly special.

We'll discuss why it's important to work with a formatter, or how you can tackle this project yourself in an upcoming post.

Then I began to think about marketing the new book and decided that what I'd really love is to have a book trailer that would provide a quick visual story of the new Mrs. Tuesday.

I read a few posts online and was inspired to try it myself. I got as far as finding music and video images. And then stopped when I realized that I had no idea of how to operate 'imovie' and even less desire to learn how.

Then I remembered that my friend Mariellen, had recently embarked upon a new career in video and film making. I contacted her to find out if she would have an interest in creating a book trailer.

Thankfully she said yes....and I was able to work with her and Ed, her partner at ThreeMoonBay.com to create the video you see below.

I highly recommend Mariellen and Ed, for their incredible attention to detail, their desire to exceed the goals of their clients, and in my case, for their infinite patience in working with a client who stares off into space and then asks, 'but,what if?' about one hundred times.

The good news is that they are wonderfully patient and produce beautiful work. Check out their website for more videos and stay tuned for another post, in the coming week, about their process of working with clients.

In the meantime, enjoy the video...and if you haven't read the book, please download a copy or order a paperback from Createspace.


This is just the beginning.....stay tuned!

larramiefg said…
Suzanne, even if you do ask "what if" a million times, you are amazing!

imlanguages said…
I am really impressed by the way you detailed everything. It’s very informative and you are obviously very knowledgeable in this field. Thanks for sharing such an amazing post. Your way of writing and making things clear is very impressive. Thanking you for such an informative article. eBook Cover Design.
October 5, 2020 at 5:22 AM