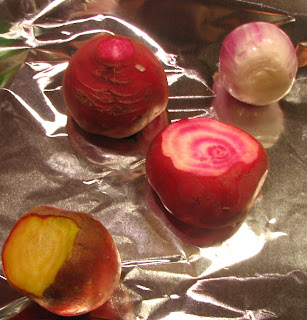 I have fallen in love with beets this summer. They are so beautiful and so tasty. And so easy to prepare. Instead of the usual boiling method, which is frankly rather messy, I decided to roast them.

I love roasting any vegetable because it's incredibly easy: throw them on a roasting pan, drizzle with olive oil, perhaps a bit of garlic or sea salt, and roast at 400 F for 20 minutes. Roasting brings out a sweet, nuttiness in any veggie and leaves the texture, which can't be said of boiling anything. For reluctant vegetable eaters, such as myself, roasting wins hands down. I'd go so far as to suggest that even kids would love roasted vegetables. 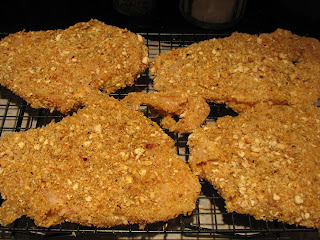 While my beets were roasting, I quickly prepared some breaded chicken cutlets. I pounded out four chicken breasts until thin, dipped them in an egg wash, then in seasoned breadcrumbs. I like to let them dry on a wire rack for a few minutes before frying. 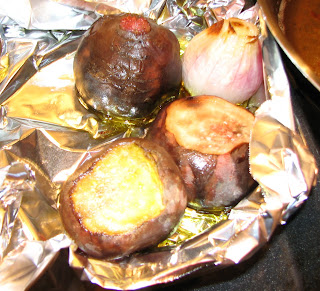 Here are my beautiful beets when they came from the oven. The picture doesn't do them justice, but they're a brownish red and look good enough to eat right then. You'll also notice I roasted an onion in the same batch. 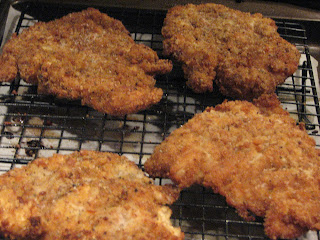 And here are my chicken cutlets, magically fried and back on the wire rack, resting. 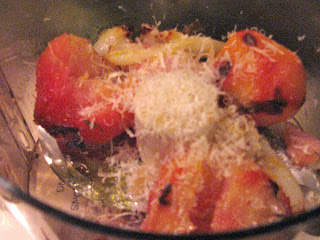 I threw the roasted beets into a food processor with the roasted onion, freshly grated parmesan cheese and olive oil. Pulse until the beets resemble roughly mashed potatoes. 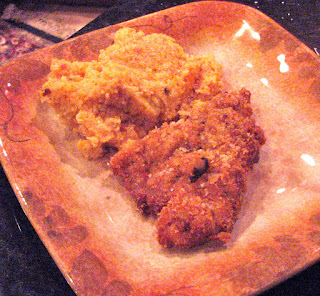 And dinner is served!

Anonymous said…
Roasted beets, truly delish. I think you should consider writing for a cooking magazine, what do you think?
September 15, 2011 at 2:14 AM