How to Improvise: Cajun Meatloaf via Great Good Food by Julee Russo 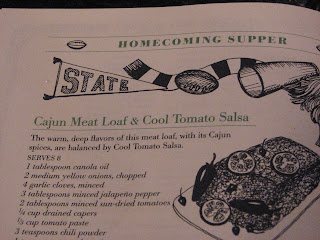 How many of your remember THE SILVER PALATE cookbook? I do. It's one of the first cookbooks I bought when I first began to pursue my interest in cooking. It was a huge hit in New York, as it was written by the Julee Russo and Sheila Lukins and named after their gourmet shop of the same name. Recently the book was re-issued in a 25th Anniversary edition, which gives you some idea of its importance in the pantheon of American culinary history. Yes, it was that important. In my opinion, it was as influential as Martha Stewart and Ina Garten aka The Barefoot Contessa, in establishing a certain, opulent, bountiful, American cuisine. And by rich, I don't mean expensive, I mean tasty. 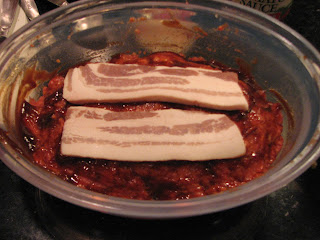 Julee Russo established a lovely bed and breakfast called the Wickwood Inn in Saugatuck, Michigan, which I hope to visit some autumn, and she wrote more cookbooks. Big, fat, all encompassing cookbooks, such as The New Basics, and Great Good Food, that are friendly and accessible and take your every day favorite dishes and give them a fresh perspective.

This week's recipe, Cajun Meatloaf, comes from Great Good Food and is also a lesson on improvisation in the kitchen. 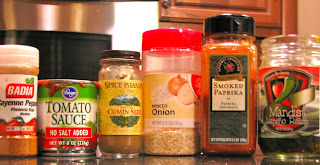 I love meatloaf. But throwing together the same ketchup/BBQ sauce/breadcrumbs variations can get boring after the 100th iteration. Which is why I was very interested in trying Julee Russo's Cajun influenced recipe. However, when I read her recipe, I didn't have all the required ingredients. For instance, her recipe called for half ground beef - half ground turkey. I only had ground beef. It called for fresh jalapeno, I had a jar of pickled jalapenos. Tomato paste? Nope, tomato sauce. You can see where this is going.... 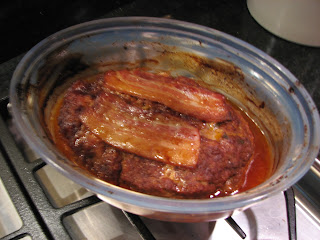 Instead of abandoning the recipe, I chose to read it, make note of the flavor profile she was creating, and make do with what I had in my own pantry to re-create the dish. And it worked beautifully. For instance, I didn't have chili powder to go along with the cumin called for in the recipe, but I did have smoked paprika to use with cumin and I still achieved the smokey depth the recipe wanted to achieve. Sure, pickled jalapenos are sweeter than a fresh jalapeno, but I like the unexpected flavor twist it added to the final meatloaf. 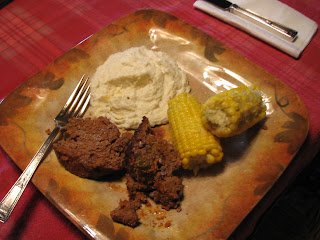 The point is, it's always recommended to follow a recipe to the letter the first time, in order to see what the original cook was trying to achieve. However, in a pinch don't be afraid to improvise by incorporating similar ingredients to achieve a similar result. This approach will lead to creative fun in kitchen and your ability to make a dish your own.

So here's my riff on Julee Russo's Cajun Meatloaf recipe. And please check out her cookbooks, they are incredibly fun and creative and inspiring.

Mix all ingredients together using your hands. Form into a loaf and place in loaf pan or 2 quart baking dish. You may slather the meatloaf with ketchup or BBQ sauce if you wish, a piece of bacon is also a nice touch.

Let rest for 10 minutes after taking from oven.

Serve with mashed cauliflower 'potatoes' and corn on the cob.

lorna vanderhaeghe said…
Cajun meatloaf can be prepared in a lot of different recipes.
August 18, 2011 at 12:38 AM