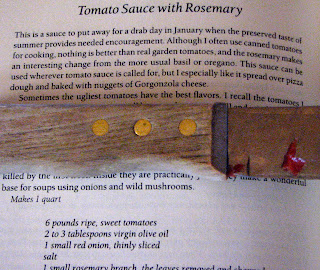 This week's recipe comes from THE SAVORY WAY by Deborah Madison, author of The Greens Cookbook, which we featured last week.

My choice this week was inspired by the simple fact that I had a bunch of tomatoes that needed to be used before they spoiled and so I went in search of an easy tomato sauce recipe.

This summer we've slowly been converted from using store-bought jar  variety spagetti sauce to those we make ourselves. They are simple, require few ingredients, and we don't have to question the quality of the ingredients, or the amount of sugar or salt used. 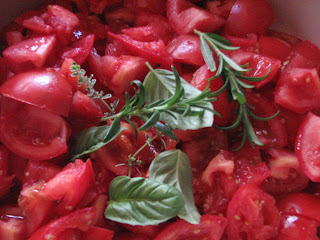 Our previous ventures in sauce making required the blanching, peeling, and food processing of the tomatoes before reducing them into a sauce. I assigned the blanch and peeling to Mom, since I abhor that sort of delicate work which invariably tries my patience.

Which is why I was thrilled to read the Deborah Madison's recipe for tomato sauce which skipped these steps altogether. In fact, the recipe consists of little more than: 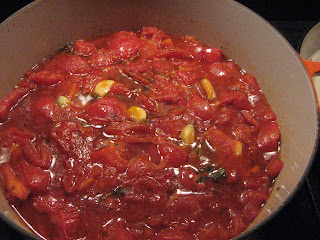 After two hours the sauce looked like this. We took it off the stove and after it cooled a bit, we passed it through a food processor to create a smooth, albeit still chunky, saucy.

As for the most important aspect, taste? Actually, this recipe produced the best homemade tomato sauce I've had. It had an earthy richness that was missing from the blanched version.

We've frozen bags of this sauce to use as a base for other spagetti sauces in the future. As you can imagine, the possibilities are endless simply by adding meat, herbs, vegetables, or using it as a base for lasagne.

KiKi said…
I have just moved to Italy and was looking for a recipe to tomato sauce. I came across yours and it was the first one I found that didn't tell me to use canned tomato. I am excited about trying it out. Thank You.
July 27, 2011 at 12:53 PM