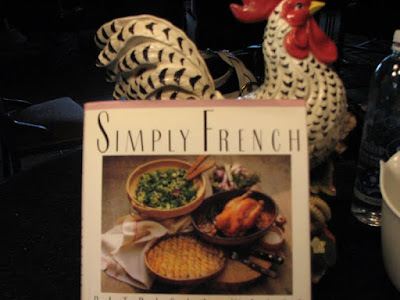 The first cookbook I bought by Patricia Wells was Bistro Cooking, which I adored and used to make goat cheese dip and steak frites. Somewhere along the way, during this same period (late 80s) I bought another of her books, SIMPLY FRENCH: PATRICIA WELLS PRESENTS THE CUISINE OF JOEL ROBUCHON.
During the heyday of these books, French bistro cooking was all the rage and Patricia Wells was making a name for herself as one of the best cookbook authors of this segment of the genre.
At the time, I was living in New York and her books appealed to two of my requirements, 1) that the food was accessible, easy, and tasty, and 2) I was in love with all things French. It was during this period that I first read Hemingway's A Moveable Feast (still one of my favorite books) and made my first trip to Paris.
Ironically, though in keeping with many of the cookbooks that I bought during this period of my life, though I collected all the latest trends in cookbooks, my experience with the actual book was more as a reader than a cook.
When I opened Simply French a few days ago, the first recipes I looked at were the ones for roast chicken. We make a lot of roast chicken around here. Mom has painstakingly spent two hours sitting in front of a hot oven to turn a chicken every 15 minutes in keeping with a recipe from Julia Child's Mastering the Art of French Cooking. We used a clay oven we bought at the thrift store with great success. 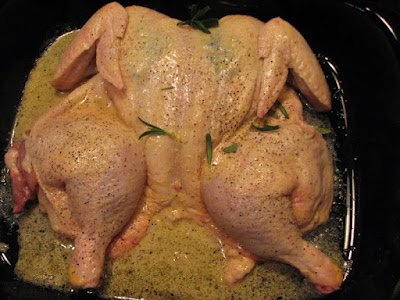 So my attention was immediately drawn to Patricia Wells' recipe for charbroiled chicken, whose most intriguing aspects were that the chicken was butterflied and that the cooking method was under a broiler rather than roasted.

Interestingly, the first time I'd seen a chicken prepared in this manner wasn't at all French, it was in Baku Azerbaijan where nearly every local dish we ate was cooked on an outdoor grill, including butterflied chicken. Still, I'd never heard of making this dish in the oven in place of an open flame. And since it fell into the roast chicken arena, it had to be tried.

The first step, marinating, consisted of a typically French vinaigrette of olive oil, lemon juice, and Dijon mustard. I added fresh rosemary tucked under the skin of the breast, as well as fresh ground pepper. The recipe called for marinating the chicken for two hours, at room temperature. This gave me pause since it is summer and I was concerned about the chicken spoiling, so I marinated it in the refrigerator and then brought it up to room temperature while I waited for the oven broiler to heat.

By the way, you can either butterfly the chicken at home by removing the backbone or you can have your butcher take care of it. 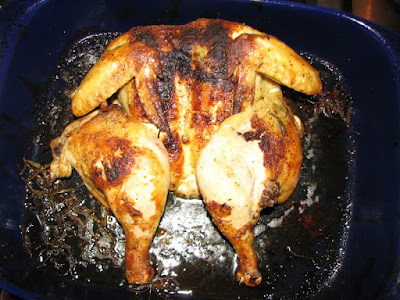 The end result is actually much tastier than this poor bird appears. The skin on the 'shins' was torn during the turning phase and the 'hips' were dislocated. The skin is probably darker than suggested in the recipe. However, despite appearances, I promise you that this is one of the best birds we've had. The meat was tender and juicy. And it was so simple to make that we will definitely make this recipe again.
This exercise has piqued my interest in pulling out more French cookbooks and perhaps even my old copy of Bistro Cooking.
Bon Appetit!
Email Post
Labels: broiled chicken French Cooking Mastering The Art of French Cooking Volume One Patricia Wells roast chicken

larramiefg said…
Roasted chicken is one of my favorites and has been substituted for Turkey on more than one holiday.
June 27, 2011 at 9:49 AM

BCapt said…
oh my god,
you make me so hungry
you must responsible for me! :D :lol: