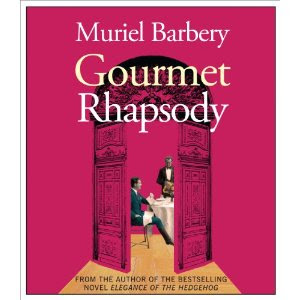 Can I seduce you into reading a book by stringing together some memorable excerpts from the book?

In the case of a book like GOURMET RHAPSODY it might just work because the book itself is not so much a story as a meditation on what we value in life. Or in the case of the main character, 'the world's greatest food critic', a desperate search for the most meaningful taste memory of his life. Recollections of family and friends merely get in his way as he scrolls through a lifetime of sensory memories in a race against time.

Perhaps it is this cold, gimlet-eyed view of human relationships that had left so many readers feeling quite lukewarm about this book, especially those readers who came to this book after reading THE ELEGANCE OF THE HEDGEHOG (also written by Muriel Barbery) which has enjoyed such popularity both in the United States and in Europe.

As I mentioned above the plot of GOURMET is rather thin. We meet the protagonist as he lays in his bed having just been informed that he has 48 hours to live. We spend those remaining hours by his side (he never does leave the bed, except in his imagination) as participants in his recollections. Interspersed between these chapters, like a Greek chorus, are brief, often bitter, soliloquies by those who have attempted to love the old bastard throughout his life only to find that the only thing he is capable of loving is himself....and his genius at critiquing food.

Given this unpleasant protagonist and lack of plot, what redeeming qualities would entice one to read this book?

The book's true delight comes through the delicious descriptions of food and memories of food written by Muriel Barbery. So, if you're like me, and enjoy talented food writers such as MFK Fisher and Laurie Colwin, give consideration to GOURMET RHAPSODY.

And this is where I will leave you, with the author's words...

On tomatoes: "In her dirty hand, deformed by work in the fields, there it sat: crimson in its taut silken finery, undulating with the occasional more tender hollow, with a communicable cheerfulness about it like a plumpish woman in her party dress hoping to compensate for the inconvenience of her extra pounds by means of a disarming chubbiness evoking an irresistible desire to bite into her flesh."

On a ham sandwich: "Two thin slices of raw smoked ham, silky and supple along languid folds, some salted butter, a hunk of bread. A vigorous taste and smooth texture: improbable but delectable."

On one's hosts: "The food was simple and delicious, but what I really devoured-to the point of relegating oysters, ham, asparagus and chicken to the rank of secondary accompaniments-I feasted on their words [..] the sort of words that, at time, delight one much more than the pleasures of the flesh."
Email Post
Labels: book review gourmet rhapsody