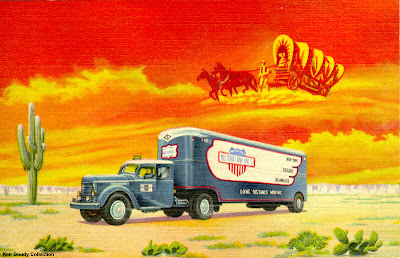 
Last week I unpacked my last box and breathed a sigh of relief. What I should have done was laid down and taken a nap...because that last box was simply the end of Round One.

You see, I've got THREE storage lockers, representing fifteen years of nonsense that are now on their way to me from Florida. Yet, I've never left my desk. Magic? Well, we'll see when and if they get here.

At the very least it's been quite an adventure.

Originally, I'd planned to fly down to Florida, meet up with my brother John, rent a big truck, and do the move ourselves. And then we remembered that we're not the spring chickens, that John's business is picking up so he actually needs to stay in Tampa and not take off for Colorado for a week, and that we're not spring chickens capable of lifting and moving THREE storage lockers full of furniture, boxes filled with heavy books, and yes, assorted nonsense.

Plan B: I was still going to fly down to Florida and 'supervise' the movers who would come to my storage locker, pack and load my nonsense, and move it to Colorado. The problem with Plan B was that I would have to fly my sister up here to hang-out with Mom while I was gone. However, my sister Vicky, has a job, goes to school, and has teen-aged boys who need to be transported here and there.

Plan C: I find a local mover in South Florida who is a member of the local Chamber of Commerce, moves the local university football team, and generally seems pretty reputable. I speak with the owner of the company and he assures me that my presence is not needed.....they'll handle everything. Which is what has happened so far...on Monday they went to my storage lockers and packed everything. On Tuesday the driver and his crew arrived, loaded my belongings onto his fifty-eight foot truck and ....fingers crossed, next Thursday all will arrive here safe and sound. Fingers crossed.

I'm going to miss the cross-country drive, because as much as I hate to leave the house 90% of the time...give me a road-trip and I'm the first one in the car. On the other hand, I won't miss loading and unloading all the stuff that would have been following me. It's going to be a big enough challenge to unpack everything when it arrives.

And beyond these logistics, this move leaves me feeling wistful. This is the last of the things that remained in Florida, and the things that I first put into storage fifteen years ago when I left New York. In some ways, going through these boxes will be like an archeology project...I'm not quite sure what I will find or how I will feel. It will certainly add a sense of permanence to this move to Evergreen, which as much as it has been dreamed of, makes me also realize how much I have also become used to the freedom to take off at will. This is going to be interesting.
Email Post
Labels: Evergreen Colorado movers moving National Van Lines

Anonymous said…
Numbers shout out at me from this well written piece, like 15 years, 3 storage lockers, and 58 foot truck!

I wish you would photograph the truck as it arrives and the unloading. Maybe even a few of the special things you've missed and maybe a couple you'd forgotten you ever had.

What an interesting and memory provoking experience you are going to have soon. I remember how I excited I felt when my things came to Cornwall and it had only been a few months since I packed those for shipping.

Mariellen said…
Man Suzanne, you and I are going to go through our house sorts at about the same time. And maybe those who have done it more recently can tell us and urge us on to steely will - to divest ourselves of a lot of what we think we WANT, but if we don't use for 3, 5, 10 or even 15 years....don't even remember it in some cases as Elizabeth says...then do we really NEED to keep those things (not to mention the cost of storage.) I'm thinking maybe not.

The difference is that I wander around my house and trip over the stuff ..where as yours has been neatly out of sight and tidied away. Personally, I'm looking forward to getting rid of this bizarre and somewhat incomprehensible security blanket of mine. I'm horrified at the money I've wasted on all this stuff, and like you, really enjoy the roadtrip side of things which the clutter makes harder to do, I feel. Perhaps we all need different things at different ages or points in our lives.
February 18, 2011 at 1:52 PM

JCK said…
You will love having someone else move you! I promise all will be well.

As for unpacking the old memories, it is bound to be emotional. Fun, too. You have amazing insight into yourself.