Originally I had big plans for this post. I took lovely pictures as I made the meal. I figured it had been a long time since I'd done a recipe post and I wanted to share what I was going to call "Cooking with Mom". Only it wasn't cooking with Mom....while I was busy making this chicken stir-fry, she was concentrating on her forte, chicken stock.

Which is probably why things went horribly wrong.You see, over the past several months, Mom has become a much better cook than me, thanks in large part to her patience, her willingness to follow directions, and her ability to take a slow, methodical approach to cooking. All of which is exactly the opposite of my philosophy toward cooking, or just about anything else.
Which may have a great deal to do with the disaster that soon ensued. 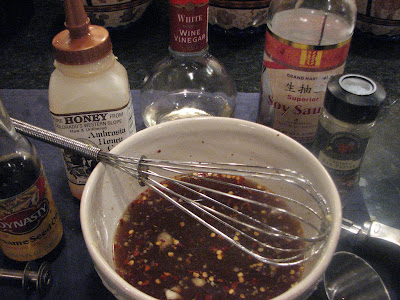 Earlier in the afternoon, we'd been at our local 'Natural Grocers' where Mom started up a conversation with a woman who described a quick and easy chicken stir-fry recipe. Since we are always looking for ways to incorporate more veggies into our lives. We listened, bought vegetables and went home to make dinner.

By the time we got home, I'd forgotten the recipe, so I looked up a new one that inexplicably involved a cup of white wine vinegar, which was so pungent that it made my eyes water. 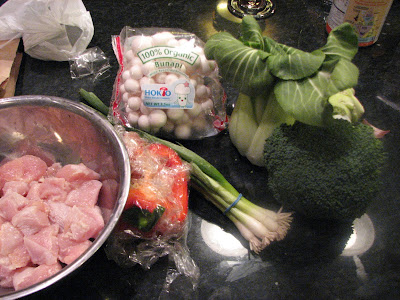 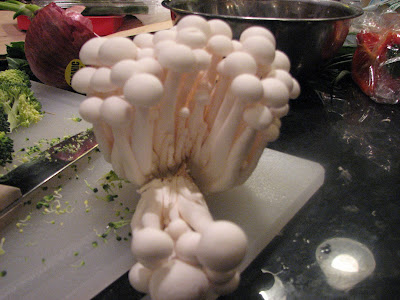 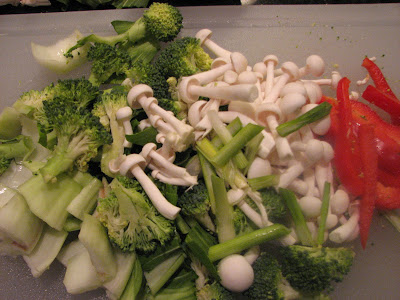 I chopped them all. They were beautiful, I was so proud of my efforts. 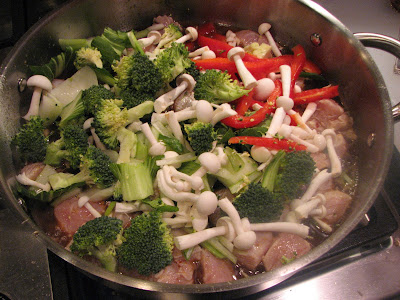 After I'd poured the eye-wincing sauce in a pan and brought it to a boil, I added the chicken and vegetables. 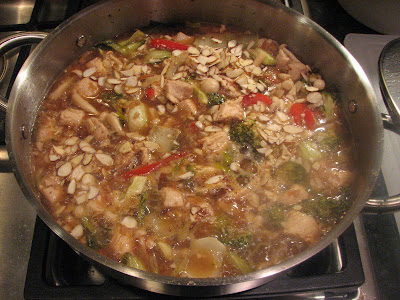 And here is where things began to go terribly wrong.

I was supposed to reduce the liquid by half before adding the chicken and veggies. I didn't. Instead, after I added the other ingredients and realized my mistake, I turned up the heat and stood by hoping the excess liquid would magically evaporate. It didn't.

So I went into 'fix-it' mode: I added a cup of brown rice, hoping that as it cooked it would absorb the excess liquid. Two hours later, the liquid was absorbed, but for some reason, the rice never actually cooked, it was literally still crunchy...however, it did form a brown crust on the bottom of the pan.

By ten p.m. I resorted to the only logical action....I threw the entire mess into the trash. Which caused me pain, as I hated to waste the money invested, and of course those lovely vegetables which had been reduced to a mushy mess.

I've learned a couple valuable lessons from this experience:

1) I've never been a real fan of chicken stir-fry, so my execution of the dish suffered. This probably translates to other areas of life....if I'm not passionate about the undertaking, my commitment may not be up to the task.

2) At times, attempting to fix a situation is like chasing a snowball downhill...more is not always better.

By the way, while this mess was going on Mom was calmly making her chicken stock, which of course turned out brilliantly.
Email Post
Labels: chicken stir-fry cooking with mom Evergreen Colorado recipes

Anonymous said…
John would have eaten it anyway. Overcooked or whatever, he does not throw food away. I may have snuck a few things to the garbage since I've been married to him, but you did not hear that from me. :-)
February 22, 2011 at 1:47 PM

Anonymous said…
You sound like me only I'm worse on the concentration front. On the rarte occasion I have followed a recipe, generally it turns out OK.

Keetha said…
What I love about this is the lessons you garnered from it! That's impressive.

Those vegetables *are* gorgeous.

Do you roast many vegetables? That's a surefire I've found to make them delicious. Broccoli, asparagus, green beans, usually with a roughly chopped onion, drizzle of olive oil, and sprinkling of salt and pepper. Really good and easy!
February 23, 2011 at 9:16 AM