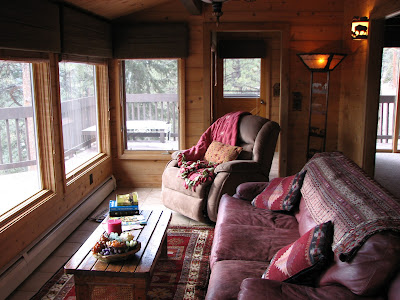 In the comments section of my last post, my friend and fellow blogger, Larramie, asked how my brother John changed my mind about choosing this house. I thought I'd share that process with you because it taught me an important lesson about getting unstuck.

I first saw this house, my new house, back in September. I rejected it because I thought the ceilings were too low compared to the very high ceilings of the house I was renting at the time. However, I also sent my brother John an email brochure of the property since he was interested in our house hunt. He immediately liked the house and encouraged me to give it further consideration. So over the following months of October and November I went back to the house about five times, each time convincing myself that this was not the house for me. In particular, I didn't like the small room off of the living room that was being used as a dining area, because of its low sloping ceiling.

By mid-November, John was calling almost daily for house hunting updates, since the landlord of the house we were renting had informed us that he was going to move back into the house by mid-December, which meant that we needed somewhere to move. Finally, John suggested that he come out to Evergreen from Tampa for a couple days to look at the house with me. I accepted his offer, certain that if he saw the house in person he would see things my way (John and I have a looong history of sibling rivalry that makes Cain and Abel look like Laurel and Hardy).

So on a Sunday morning in late-November, the week before Thanksgiving and three weeks before we had to move from our former home, John flew into Denver and I drove him straight to the house. After he looked around for ten minutes, he sat down on the steps and said, "I don't want to influence you, but I'd buy this house." He then proceeded to go through my list of objections one by one and offered actual solutions that would fix the problems (Don't like a sloping ceiling? Build a gabled roof! Don't like the master bath? Put in those pebbled floors you've always dreamed of!). Did I mention that John is also a building contractor with a great deal of experience with home remodels?

Suddenly, instead of seeing that house as a source of frustration, I was giddy with ideas to create a place I would really love. Yes, it will take time and money...and it may be years before I am able to accomplish everything. But instead of frustration, I have new projects to dream and plan! Suddenly, something clicked in my mind and I was able to shift my perspective and see the house differently. Instead of focusing on its perceived faults, I was able to see its real beauty. That's probably why I feel so at home here now.

Two days later, as I was driving John to the airport for his flight home, I received the call that my offer on the house had been accepted. Which is why I was able to write that cryptic post in November, thanking John for his help with that 'un-named' project.

While on one level, this is a post about what a great brother I have (and I do) and how my family offered wonderful advice and support during a very stressful time (which they did, thank you Kathy!).... it's also a post about how to get unstuck.

It occurred to me that at times we can get so enamored of our opinion, of our need to be right, that we can become mired in a situation, when simply shifting our perspective would allow us to move forward. After the dust had settled, I asked John how he had known what to say to me. He said that he listened to my objections to the house as he would listen to a client. Then, when he saw the house in person, he was able to counter my 'feelings' about the house with concrete solutions. Luckily, because I respect my brother's superior knowledge of houses, I was able to allow myself to look at things differently and thus move forward, from a limited belief to excitement about new possibilities. The irony is that of course the house hadn't changed a bit in the two months I'd been looking at it, only my perspective.

So that's my most important lesson of 2010, and one I hope to incorporate as I move into 2011. When I face what seems like an insurmountable problem, or when I feel myself getting stuck by one view of a situation, I will remember that if I am willing to open my mind, the solution will appear from another perspective.

As to that dining area that caused me such frustration? Until some future day when I raise the roofline, I've redefined the space, from dining area to 'reading room,' and it's now one of my favorite places in the house.
Email Post
Labels: change your mind changing perspective home improvement house hunting how to get unstuck

Dee DeTarsio said…
Hi Suzanne! I Love your new reading room--it's perfect--and your ability to "re-purpose" your perspective!
January 10, 2011 at 8:25 AM

larramiefg said…
My word, I thought that area was meant to be a reading room -- it's perfect!

Also what seems obvious is that the house knew it was yours and kept waiting for its rightful owner!!!
January 10, 2011 at 11:08 AM

Keetha said…
I agree with Larramie - what a great reading spot!

JCK said…
Oh Suz, I love this post. Such a huge lesson not only for you, but for all of us to really listen to. I SO agree about the getting stuck, especially if we get caught up in being right. Your brother offered a perfect counter with his contracting experience. :)

So great to hear from you, too. As for toasters. I think different than blow dryers. Buy a good one. However, I could write a whole blog post on how toasters aren't made like they used to be, and...how you never know how toasted your toast is going to be! LOL
January 10, 2011 at 3:05 PM

Mariellen said…
I loves it! and I loves your open mind that recognsied what as happening, and leapt beyond it. Good work, Suzanne! And I really LOVES your reading space. So cosy and welcoming.
January 10, 2011 at 5:52 PM

Unknown said…
I've only just discovered your blog and am extremely envious of your 'reading room'. Your new home sounds awesome