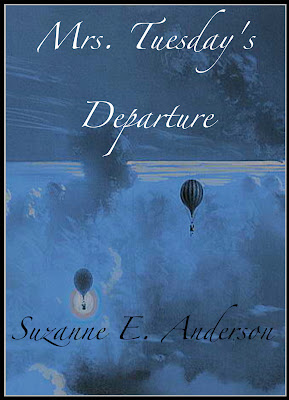 When I decided to self-publish one of my novels as an ebook, I really had only one choice. I've written three, or rather two and a half, novels. The first novel will someday need a complete re-write. The second novel, Mrs. Tuesday's Departure, was done but needed some tweaking. The third is the murder mystery that I am currently working on. So the choice was made for me: Mrs. Tuesday's Departure would be my debut.

Since I had not opened the novel's Word file in over two years, editing it was like visiting an old friend. The first meeting was awkward. The first few pages of editing were strange as I found places where I had changed the book from first person POV to third person, where I'd changed the names of the characters, and even changed the city the book is set in.

But like visiting a good friend that you haven't seen in years, the awkwardness quickly wore away and I found myself drawn into the story, and really enjoying myself. The more I edited, the more I loved the story. Without giving away the story, I will tell you that Mrs. Tuesday's Departure originally started as a story about a family caught up in the terrors of World War II Budapest. However, I changed the particulars of the story, choosing to refer to the Nazis as the 'Black and Reds' and never naming the actual city instead simply alluding to the fact that it was a European city. I made these changes because I wanted the story to focus on the relationships within the story, because to me that was the real point. How do the dynamics of a relationships between siblings change in the face of illness? How do we react under the ultimate stressful situations? How do we express our loyalty? How far are we willing to go to save those we love?

As I moved through the editing process, I was delighted with the characters and how they evolved, how each one struggled to tell the story from their perspective. I hope my readers will have the same happy journey as they read the finished product.
Email Post
Labels: ebooks how to self-publish mrs. tuesday's departure self-publishing

larramiefg said…
Don't you wonder how the characters felt about being rediscovered, washed, dressed and then sent out into the world?
November 2, 2010 at 10:13 AM

slow panic said…
i always feel encouraged when i read about the progress you are making.
November 2, 2010 at 10:38 AM

Keetha said…
This is so exciting! I love reading about your writing/revising progress.