I've never met a chili recipe I wouldn't try...but then again, I've never met a recipe I'd follow to a T. So when I read country music star Zac Brown's recipe for Camfire Chili in last week's Parade magazine, I knew I had to try it. But I also knew that it wouldn't be long before I started to improvise....I've never been good at following directions.

You can click on the link above to get Zac's original recipe. What follows is my interpretation, with rifs from the Foodnetwork's uber chef Bobby Flay (love his Throwdown show) and hottie chef Tyler Florence (woot!). 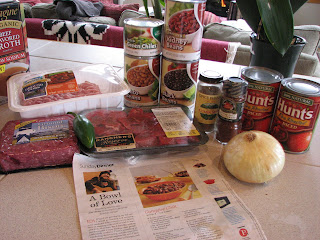 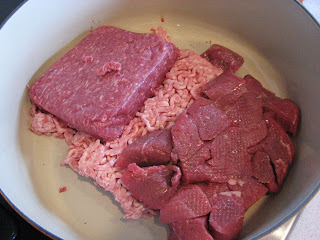 One of the reasons I wanted to try this recipe was the use of three different kinds of meat. One pound each of: ground pork, ground bison, and cubed beef. Next time, I'd keep all of the meat cubed rather than ground, I think it would add more to the flavor of the chili than the ground meat.

Anyhooo, begin by browning the meat. 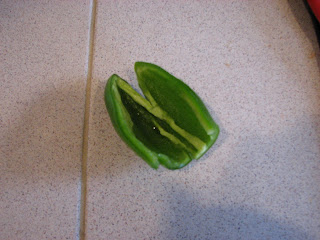 Next up, is the addition of a jalapeno. As you can see, I've seeded it to take some of the heat out of it. Then I diced it. 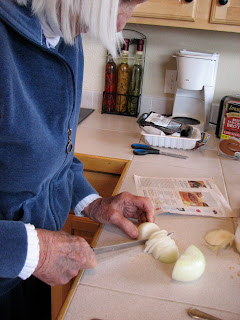 I enlisted Mom to dice the onions because they make my eyes water and because Mom never thinks I get the dice small enough to her liking.....so have it, Mom! 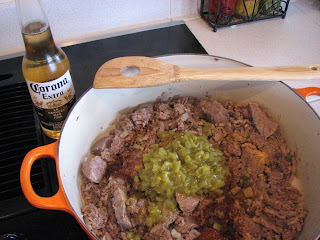 Once the meat it browned we added a can of green chilies, the jalapeno, and the onions. Oh, and that bottle of beer you see in the background. 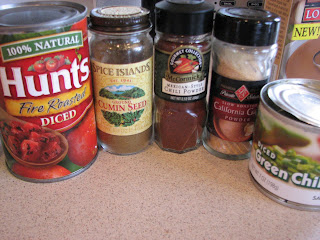 Next up was the addition of the spices you see in the background: cumin seed, chili powder, garlic powder, a pinch of sea salt, and ground black pepper. We also added a couple cans of fire roasted diced tomatoes. I like the fire roasted taste, perfect for chili. 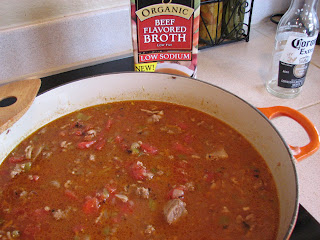 Zac's recipe called for something I haven't tried before: the addition of beef stock. 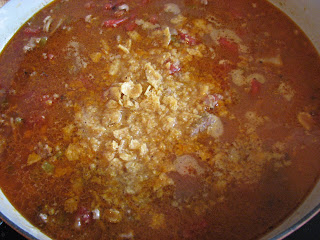 His recipe also called for masa flour as a thickener. Which I didn't have. So I crumbled up some corn chips and achieved the same result. 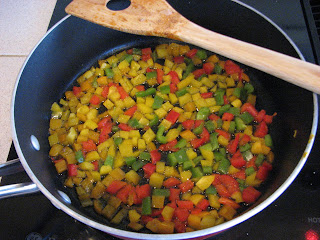 And now begins our deviation from the recipe. Mom has a thing for peppers so she diced up yellow, orange, red, and green peppers and briefly sauteed them in a separate pan and then added them to the chili. 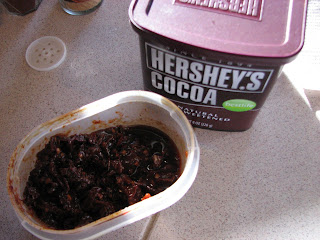 Then, with inspiration from Bobby and Tyler, I added a couple tablespoons each of chipotle peppers in their smoky adobo sauce and some unsweetened cocoa powder to add a chocolatey richness often found in Mexican sauces. 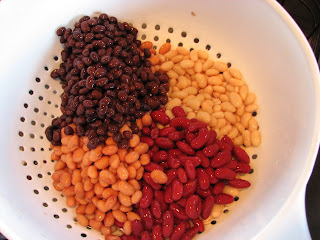 Next up is the addition of beans. We've got four different varieties here....the more beans the better in my book. They're a great source of fiber and make the chili go further if you're cooking for a crowd. 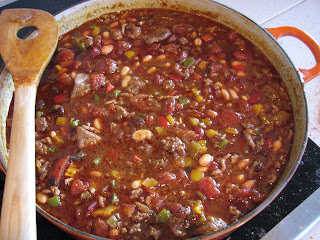 So here's what the whole mess looks like after you've added all the ingredients. 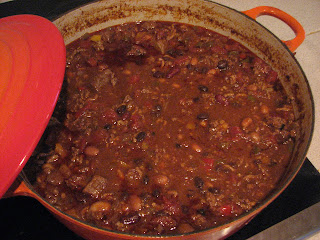 And here's what it looks like after it's cooked for a couple hours. If the chili is too thick, just add more beer (or another liquid of your choosing, we prefer beer.) 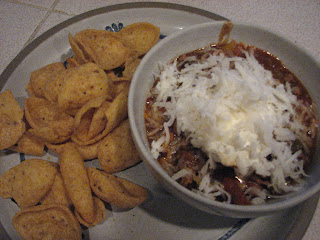 And here's what it looks like on my plate. I've added a dollop of sour cream and shredded an aged goat cheese which adds a different, but complimentary flavor than the usual cheddar. Of course, chili is not complete without Frito corn chips.

round zebra rug said…
great... this will be my first attempt at making chilly hope it comes out as great as yours
November 30, 2010 at 3:11 PM

. said…
This was a really fantastic postthat I really do appreciate. This is something that is really amazing and interesting to me to say the least.
Giraffe blanket
November 30, 2010 at 4:12 PM

Keetha said…
We plan to make chili this weekend AND we have the Fritos, too, for it!

Also, thanks for your kind comment on my blog. Anytime you are anywhere in my vicinity, you are welcome. Truly.
December 3, 2010 at 10:27 AM