As summer draws to a close and we begin to feel the first cool nip in the air when we go out in the morning, let's feature a soup that may be enjoyed either cold or hot, depending on the season: borscht.

Borscht will always remind me of Kiev, Ukraine. The first country my parents moved to when they worked overseas after retiring from their jobs in the States, and the a country where I lived with Mom after my father passed away there. My mother frequently asked our housekeeper in Kiev to make borscht, and we'd often find a pot simmering on the stove when we came home on a cold winter's evening. While I'd never had beets before moving to the Ukraine, I grew to love another dish our housekeeper made with beets, an upside down layered salad that featured beets, potatoes, carrots and an obscene slathering of mayonnaise on the exterior, which gave the mound an appearance of being a cake...until you cut into it.

In the Ukraine, borscht may be used as a general term to refer to any vegetable based soup, sometimes with a few small pieces of beef thrown in to add substance. In the States, we are most familiar with borscht as a beet soup, pureed, and served hot and topped with sour cream. It's the type of dish you'd find in your favorite deli.

We made this soup twice this summer, each time doing it completely old school, e.g. from 'scratch'. 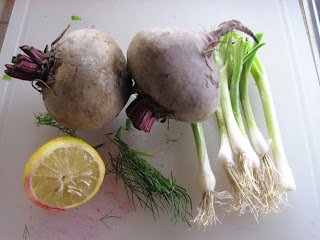 As you can see, the ingredients are very simple. You begin by boiling the whole beets in water until the beets are fork tender. 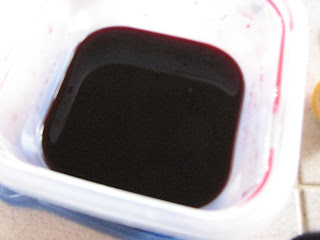 Reserve some of the liquid, which you can combine with chicken stock to create the base of the soup. 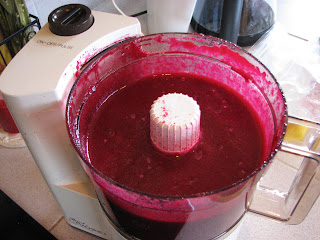 Put the roughly chopped beets, scallions, fresh dill, a squeeze of lemon, and the beet liquid and chicken stock into a food processor. Process until smooth. Taste and flavor with white pepper and salt. Then refrigerate overnight to allow the flavors to combine. 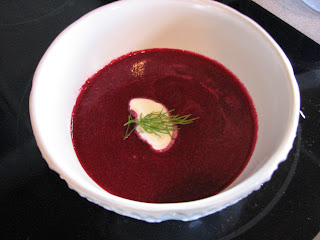 Serve the soup with a dollop of sour cream and a sprig of dill. Enjoy the gentle sweetness of the beets.
Email Post
Labels: borscht chilled soups cooking

Midlife Roadtripper said…
Such a pretty color. I think I was in my late 20's the first time I had borscht. I felt so, so, Russian. And much more worldly. Delicious.