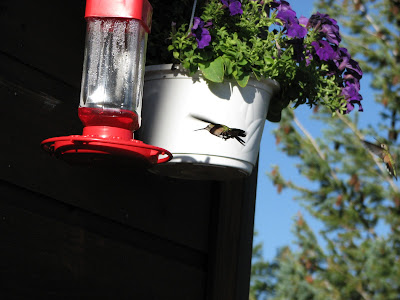 Recently I installed a hummingbird feeder on the deck after I saw how my potted plants were attracting these delightful little birds. Not only do the birds love the feeder, or rather the sweet nectar housed in the feeder, they've become quite territorial about who gets to feed there, thus providing endless entertainment. In the pictures above, you first notice the bird highlighted against the white pot. However, if you look to the right edge of the picture, you'll also see another hummingbird approaching the feeder. 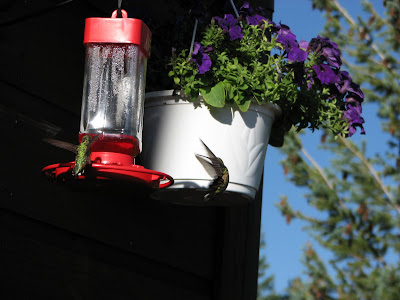 As the birds became more comfortable with the feeder and my presence, they became bolder in their approach. 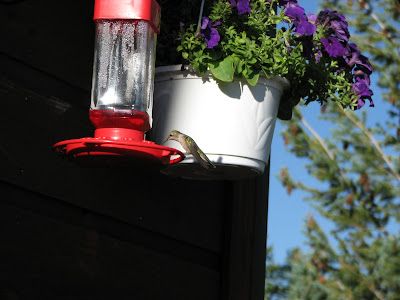 Most of the time the hummingbirds are in flight and darting around so quickly that it's difficult to actually see them. Part of their increased comfort level is that they now take the time to perch on the feeder while they feed instead of darting in quickly, and then flying away. 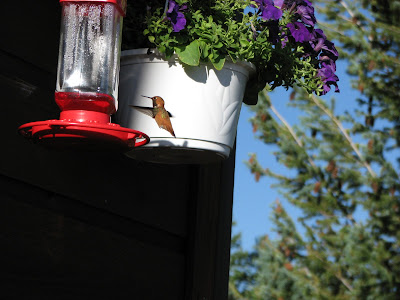 This brown one, called a Rufus (I've been told) is incredibly territorial and will dive bomb any other hummingbird that approaches the feeder while he's there. 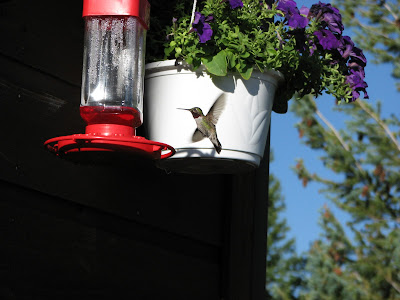 Now that the bossy one is out of the way, the gentle green hummingbirds return. What's so incredible is that all of these photos were taken in the course of less than five minutes one morning while I was sitting out on the deck.

Bird Feeder said…
Wow really impressive photo's there, wish I had some hummingbirds in my garden.
May 23, 2011 at 6:21 AM