TV in the Bedroom? 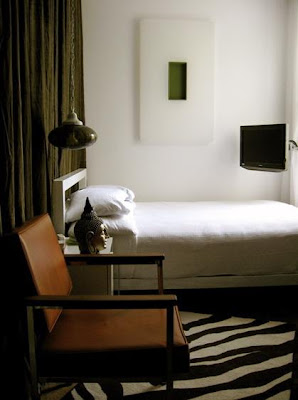 When I moved to my new house and began making arrangements for the utilities, I faced the inevitable question: should I have a TV in the bedroom?

In my last home (my first home in Evergreen), the Swedish Farmhouse, I found myself having a difficult time falling asleep at night, and often I would wake up through the night at 1a.m, 3a.m., 5a.m. I didn't know what to do with myself through these sleepless nights, so I turned on the TV and relied on it to lull me back to sleep. More often than not, it worked, but I was concerned that I wasn't getting a restful sleep with the white noise of news chatter in the background. In fact, I was miserable and exhausted from the lack of sleep.

When the friendly guys from DirectTV arrived at my current home to install the satellite boxes in rooms with TVs, I asked them to skip my bedroom. They actually looked surprised, and just for safety's sake, they installed an outlet in the room, in case I changed my mind.

But I decided to conduct my own little sleep experiment. I knew I wasn't sleeping well with the background music of TV lulling me to sleep throughout the night. How would I fare without a TV in my room? How would I deal with the dark silence after I turned off the lights? Would I ever get a full night's sleep again?

As it's turned out, I've done quite well. I actually go to bed earlier than in the past and I look forward to it. Why? Because this has now become one of my daily reading times. Instead of getting into bed and turning on the TV, I now get into bed and pick up a book and start reading. I read until I get sleepy, then turn off the light, and more often then not, I'm sound asleep in minutes. Yes, I do still wake up through the night....but it seems less often, and less pronounced now. I also find myself waking earlier and feeling more refreshed in the morning.

When I was looking for images for this article, I googled 'tv in the bedroom' and found that I'm not the only one who has studied this phenomena. A 2006 study in Italy found that couples who have a TV in the bedroom have less sex, another study in 2008 found that children with TVs in their rooms are less social, especially with other members of the family! I think I'm on to something!

And what do you do before bed to assure a restful night's sleep? (besides THAT...).
Email Post
Labels: sleep TV in the bedroom TV watching habits

Anonymous said…
No TV for us. We only use our bedroom for a couple of things and TV is not one of them. ;)

larramiefg said…
I have a TV in my bedroom but never watch it while 'm in bed. Instead I read as you do, close the book, turn off the light and fall asleep quickly.
June 30, 2010 at 11:33 AM

Anonymous said…
No TV in the bedroom. And no TV anywhere else in the house either. People think I'm weird. Don't miss it, except for the odd documentary when I ask someone to record it for me. I find TV wastes in inordinate amount of time...even if it's just 'goof off' time.
June 30, 2010 at 11:13 PM