Out and About - Guanella Pass and Loveland Pass, Colorado

The secret to a successful road trip is two-fold: 1) be willing to take unexpected set-backs as the chance for new adventure, 2) be ready to activate your 'impromptu' gene.

Last Sunday, as part of our Out and About in Colorado adventures, we started out on a drive over the Guanella Pass Scenic Byway which connects Interstate 70 in the north and SR 285 in the south. 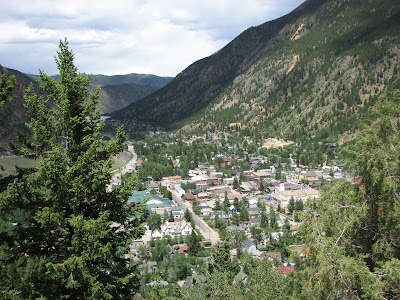 View of Georgetown from the start of Guanella Pass

Exit I-70 at the Georgetown exit, follow the  Guanella Pass signs through the quaint downtown (you may want to stop at Georgetown Valley Ice Cream and Candy for a ice cream cone!). The signs will lead you to the start of the pass which is actually a dirt road that quickly twists and turns its way up the mountain. 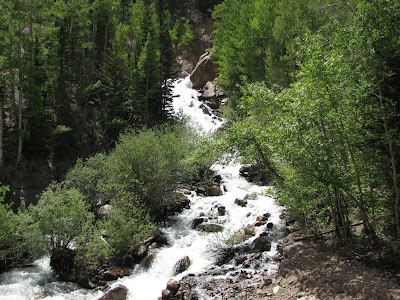 Instead, when we stopped at the Visitor's Center in Georgetown to pick up some maps for the drive, we were informed that only the first four miles of the Byway were actually open. From there the road was closed as they attempted to repair a falling rock wall.

Undeterred, we decided to make the abbreviated drive and then we would get back on I-70 and head further west to drive the Loveland Pass. A suggestion made by the very helpful cashier at the Visitor's Center. 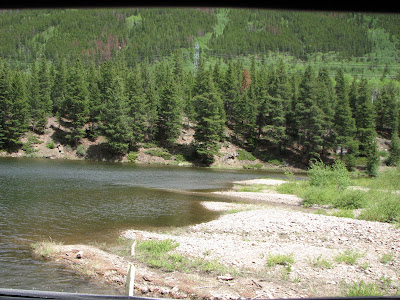 Along the shores of Green Lake
The four mile drive was worth it. As we climbed we were greeted by the lovely view of Georgetown laid out beneath us. Then at the top of the drive I found this lovely little lake and the roaring mountain stream which fed it. 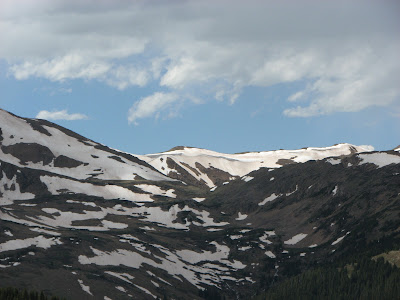 A view from Loveland Pass
Afterwards, we got back on I-70 and headed west to US 6 which took us up and over the Loveland Pass, the Continental Divide. This road has a steep 6% grade with lots of twists and turns that are challenging even in summer. I can't imagine what they would be like in winter, and yet, before the Eisenhower Tunnel was built, this was the way over the mountains and is still used by trucks today. 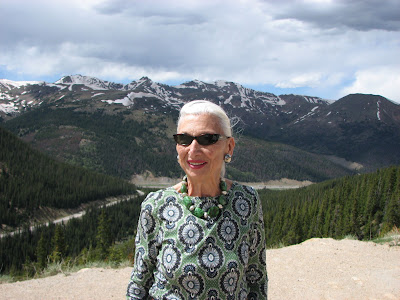 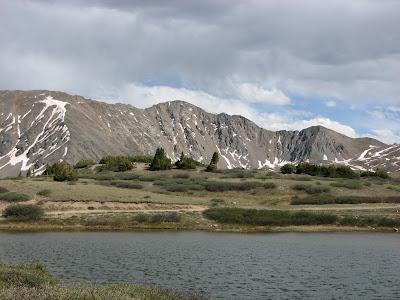 An alpine pond on the Pacific side of the Continental Divide
As we drove down the other side of the pass, we found this peaceful little pond, where we stopped for a moment.
US 6 ultimately drops down into Dillon. In town, Mom found one of her favorite shopping destinations, a local thrift store, where she scored a Coach bag for $18 and a beautiful red quilted winter jacket for $6! We then consulted one of the restaurant guides we'd picked up in the Visitor's Center in Georgetown and decided on an impromptu dinner in town. We stopped at Jersey Boys, the best pizza and sandwich joint in town according to our guidebook.... They were right, I enjoyed one of the best chicken parm hoagies I've ever had. In addition to happy bellies and full shopping bags, our stop meant that we avoided the usual Sunday crush of traffic on I-70 as we headed back to Evergreen.
Email Post
Labels: car trips guanella pass colorado loveland pass colorado road trips

We are visiting with friends in Evergreen later in the year and will keep a note of this trip as one of our Things To Do.
June 25, 2010 at 12:17 AM

Tahlia said…
i couldn't see where else to contact you, so I'm leaving this here.

Since you're a writer, I thought you might like to take a look at my blog about the journey to publication of my new YA fantasy novel, 'Lethal Inheritance’. You can read ch1 of it at
http://publishersearch.wordpress.com/lethal-inheritance/

On the home page there are postings about writing, challenges of the writer's life and getting published.
June 27, 2010 at 8:26 PM