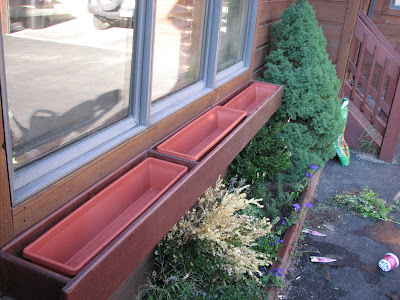 I was one of the charter subscribers to Martha Stewart Living. I bought every one of her books. She taught me how to cook. Every Christmas season I watched her primetime special, longing for snow in my Florida front yard and a determination in my heart to emulate every swag and bow even though I lived in a smallish condominium rather than a rambling home like Turkey Hill.

One aspect of Martha-dom that always eluded me was gardening. First, the rather strict taboo of planting in the public areas behind my condo. Believe me, I tried. In fact one year I actually created my own 'secret garden' by digging up a 6 x 12 foot rectangle of nice green grass, which I determined to turn into a a flower garden. Things went well for the first day or two until ultimately my garden was discovered and I was warned by the condo board that my garden had to go. So I moved my gardening endeavors indoors and satisfied my longings with a hodge-podge of orchids that bloomed once and never again, palm trees that were filled with ants, and African violets that never grew beyond their measly beginnings.

So you can imagine my delight when one of the first things I noticed at my new house were the empty flower boxes gracing the living room windows. Immediately I knew, I had plans for the those boxes. 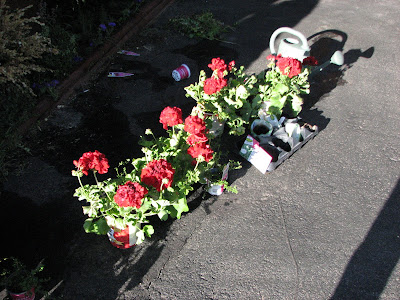 I headed to our local Home Depot and bought what I consider THE flower of summer: the dark red geranium. 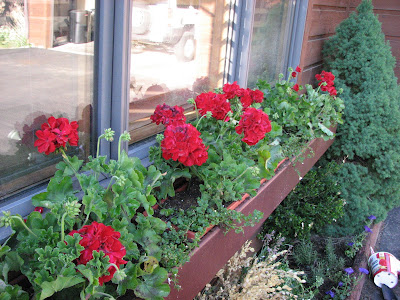 I got those flowers planted in a matter of minutes.
Isn't it amazing how easy something turns out to be once we simply get started? Too often, I allow myself to feel intimidated about taking on a new task and put it off, allowing the anxiety to build while I contemplate all the reasons why it would be too difficult to take on. Time and again, what I find is that once I've begun the task or project, it turns out to be much easier than I imagined, and that all the difficulties were only in my mind. 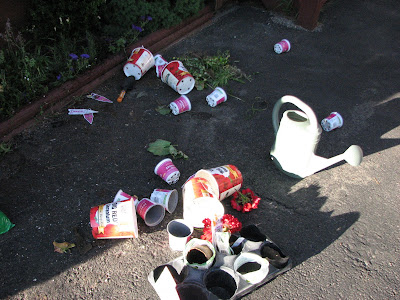 Not, however, without making a very un-Martha-like mess.
Yep, one of the realities of life is that to accomplish a thing often involves getting our hands dirty and making a mess in the short-term in order to achieve the goal in the long-term. Those empty pots are evidence that I am on my way, a first step completed, even if there is more work to do. 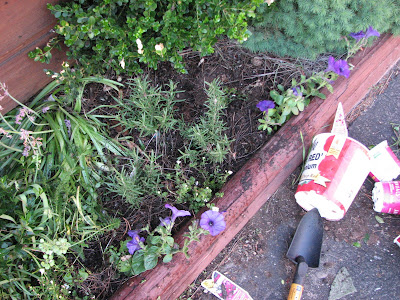 Since I was on a roll, I decided to add a few flowers to the sadly neglected flowerbed below the window boxes.
My results here were mixed, at best. The three little spindly things in the center of the picture are rosemary plants, which I hope will thrive despite my best efforts to kill them through over-watering or neglect.

Like the first draft of a novel, my first efforts may turn out to be a glorious mess. But the key is that I've begun. And with these initial steps, I can take a step back to see where I want to go from here....like that scraggly bush that might have to be replaced. Or the holes in the gardening bed that will need to be filled. 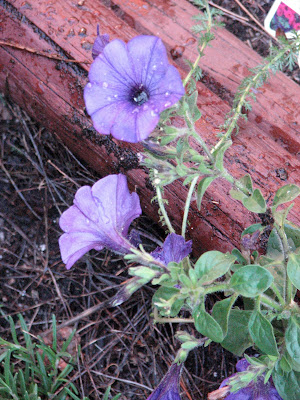 Luckily, the magic of close-up photography can make anything look good....well almost anything. Which is why I won't be including the head-shot of myself that I took at the end of my gardening adventure. It was decidedly un-Martha-like.
Email Post
Labels: Evergreen Colorado gardenias gardening Martha Stewart