Slow and Steady Wins the Day 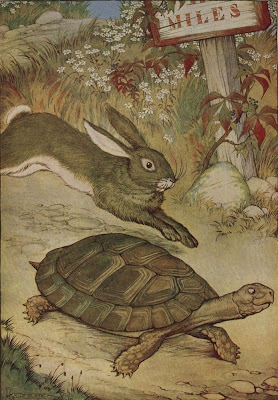 I now have a greater appreciation for Aesop's fable of the tortoise and the hare.

Some time ago, I set a lofty goal of writing 1,000 words a day in my novel in progress. On some days I met my goal, but on others, especially when I had no idea where my novel was going, I simply didn't write anything because meeting the required goal seemed too daunting. It became an all-or-nothing circle, where 'nothing' too often won the day. One day led to the next, and quickly I realized that a week and then two had gone by without a single new word written.

Last week, I replaced my daily goal with a more modest one. Instead of one thousand words (four pages), I decided I would simply shoot for one page each day. Remarkably, this benchmark seemed so attainable that I actually looked forward to opening my novel's file each day and knocking out the the requisite page. What surprised me was how good I felt each day after I finished my modest goal. It became a bright spot in the day, a feeling of accomplishment I could point to in the midst of all the other things I do which don't provide much feeling of progress (e.g. my job hunt).

At first my critical brain poo-poo'd this small progress as inconsequential. Still, each day I opened the file and wrote my page, saved my work, closed the file and wrote my word count on a pad by my computer. Last night as I wrote my latest figure, I realized that in course of just seven days I'd written two thousand words, or eight pages. More than I've written in the past month. The anxiety I felt about where the novel was going, is gone. The process of crafting one page allows me to simply write that one part of that one scene, and trust that the rest of the book will take care of itself as I move forward. That is a liberating and exciting feeling, which has brought joy back to the writing process.

What works for you and your writing process?

Anonymous said…
I tend to aim for sessions where I write 2000 words in a single sitting, mostly because with teaching I don't get to write every day. However, sometimes I'll sit and know that all I want to accomplish is to finish one dialogue or one description. I set myself a realistic goal to suit the occasionand get a real sense of satisfaction from accomplishing it.

Anonymous said…
I also get daunted when I miss a target and catching up seems too big a mountian to climb so I don't try. Alas, a too regular orccurance!! I'll be using your example to spur me on on my quilting travels..oh yes, and weight loss, sorting house and photography technique practicing.

Really glad your progress is going so well and that you are finding such useful and helpful solutions to obstacles in your path, ones that keep your motivation and your soul feeling happy. You'll be back on track and at target in no time, you'll see. Good for you!
May 12, 2010 at 1:53 AM

Keetha said…
Congrats on your progress. You sound great!