Launch of the Evergreen Vine and Book Club

Last night I hosted the first meeting of the Evergreen Vine and Book Club. It was a great evening with eight new members joining the group and we're expecting another 5 or so in March! I wanted to share with you a recap of the evening that I've sent out to members, as well as a picture of our participants. This turned out to be a wonderful way to meet new friends. After this experience, I highly recommend meetup.com as an organizational tool to set up local clubs and to find friends with similar interests. 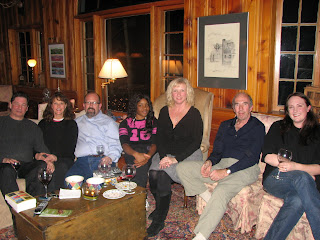 Last night we had the first meeting of the Evergreen Vine and Book Club! What a great group of men and women showed up to create a fascinating evening of conversation, wine and books. The evening started with a meet and greet around a table of wine and appetizers, we then moved to seats around the fireplace for our discussion of books. The atmosphere was relaxed and everyone contributed to a lively discussion of what we should read as our first book. If you weren't able to join us, don't worry, I've included our book pick below and we are looking forward to meeting you at our meeting in March!

Half the group was interested in non-fiction, specifically history and science. The other half was interested in fiction, with an interest in historical fiction, bestseller, and the classics. In the end, Lindsey, one of our very avid readers, suggested a book that captures the interest of both groups.

For the month of February, we've chosen THE HISTORIAN by Elizabeth Kostova. Since the book was published in 2005, you should be able to find it at your local public library, it's also available in hardback, paperback, audio and ebook at all price points. For instance, on amazon.com, you can find used copies of both the hardback and paperback for as little as $0.01 + $3.99 delivery.

Here's a brief description of the book from amazon's website:

In 1972, a 16-year-old American living in Amsterdam finds a mysterious book in her diplomat father's library. The book is ancient, blank except for a sinister woodcut of a dragon and the word "Drakulya," but it's the letters tucked inside, dated 1930 and addressed to "My dear and unfortunate successor," that really pique her curiosity. Her widowed father, Paul, reluctantly provides pieces of a chilling story; it seems this ominous little book has a way of forcing itself on its owners, with terrifying results. Paul's former adviser at Oxford, Professor Rossi, became obsessed with researching Dracula and was convinced that he remained alive. When Rossi disappeared, Paul continued his quest with the help of another scholar, Helen, who had her own reasons for seeking the truth. As Paul relates these stories to his daughter, she secretly begins her own research. Kostova builds suspense by revealing the threads of her story as the narrator discovers them: what she's told, what she reads in old letters and, of course, what she discovers directly when the legendary threat of Dracula looms. Along with all the fascinating historical information, there's also a mounting casualty count, and the big showdown amps up the drama by pulling at the heartstrings at the same time it revels in the gruesome. Exotic locales, tantalizing history, a family legacy and a love of the bloodthirsty: it's hard to imagine that readers won't be bitten, too.


We will discuss THE HISTORIAN at our next meeting, Tuesday, March 2nd. We'll also be picking our next book at that meeting. Our next book will be non-fiction, so please come prepared to suggest a non-fiction book you'd love to read! Also, THE HISTORIAN is a long book, so if you don't have time to read the entire book by our March meeting, or if it's just not your cup of tea, please come anyway, you'll enjoy meeting new people, good wine, and food and conversation that covers books and non-book interests as well.

You are welcome to bring a bottle of wine or an appetizer to share with the group.

I want to thank everyone who came to our first meeting. For those who were unable to join us because of last minute work commitments, we missed you and look forward to meeting you in March!


BOOK GIVEAWAY UPDATE: Well, sometimes you just can't give a book away! There were no takers for DON'T LETS GO TO THE DOGS TONIGHT, so I'll take Larramie's advice that this is a sign that either it's meant to remain on my shelves or I've yet to meet the person to pass it on to. Believe me, I even tried to give it away last night at the book club meeting and guess what, no takers!
Email Post
Labels: book club book review Social Networking

Anonymous said…
I loved the Historian. It was one of those books that took me a while to get through because I kept going back and rereading.

Is that a couple I see at your book club meeting on the far left of the picture? I always thought of book clubs as something you go to alone or with a friend not a significant other. I don't think I've ever been in a relationship with someone who shared an interest in the same books that I enjoy reading.

Keetha said…
I've heard wonderful things about Don't Let's Go to the Dogs tonight *but* it doesn't sound like my kind of book. It sounds like the kind of thing that would be so sad and so disturbing and so upsetting that I'd think about certain scenes at random times for the rest of my life. (Been there, doing that.)

I loved The Historian. Please let us know what your new book group thinks about it. I'm looking forward to reading The Swan Thieves.
February 4, 2010 at 9:15 AM