It's Snowing in Evergreen and there's Elk in My Yard

Last weekend it snowed off and on for the entire weekend. The result was this beautiful, but fleeting display. By Tuesday, when the sun had come out the snow was still on the ground but the strong Colorado sun was quickly revealing the brown patches of pasture beneath. Luckily for me, it started snowing again this afternoon. A light dusting, perhaps no more than an inch or two, but I'll take it. I'm still holding out hopes for a real substantial snowfall like they've had on the East Coast. 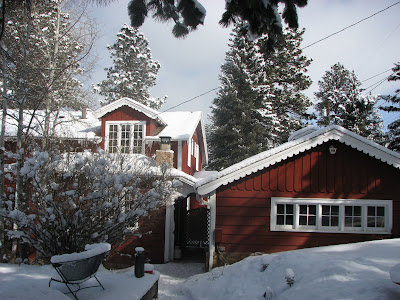 On Monday as we set the table for lunch, we looked out the kitchen window where normally we'd see Chickadees and Stellar Jays feeding from the birdfeeder. Instead we were greeted by eight elk who apparently have developed a taste for the sunflower seeds that get knocked out of the feeder and onto the ground. They were having quite a party and we're so thrilled with the easy meal that when I stepped in front of the window, they looked at me as if I was the curiosity. 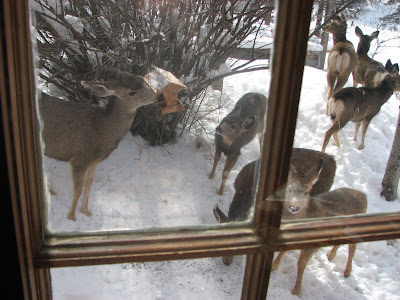 As you can see below, one clever elk decided to go straight to the source. And quickly cleaned out the entire cache of sunflower seeds that I'd just replaced that morning. 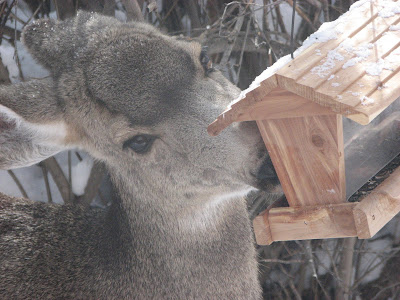 And then there's Coco. She's got a special place in her heart for the birdfeeder as well...she's convinced that one of these days her incessant barking will persuade those birds to come down and play. Although I don't trust her intentions, they may be closer to those of the Big Bad Wolf toward Little Red Riding Hood. 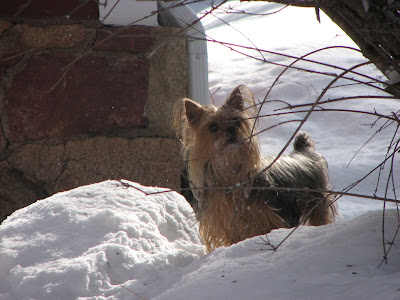 How lovely it is to be in the snow. I wouldn't mind if it lasted all summer long! 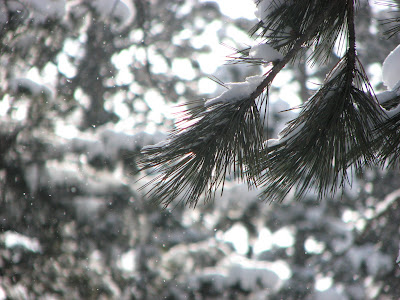 Anonymous said…
Oh, amazing. I love the snow, and the so American colours of the buildings you see from a window. The elk would have made my day uttterly. And I can see it made yours.
February 26, 2010 at 4:38 AM

Erika Liodice said…
What lovely photos, Suzanne. Your home looks like a beautiful source of inspiration!
February 26, 2010 at 8:24 AM

larramiefg said…
This honestly could be my backyard on the shores of Lake Erie. No fir trees but trees, no birdfeeder but deer, a red fox and two wild turkeys. Are the animals a good thing? Hmm, not on a suburban cul de sac that's been a residential area for almost 50 years.

I saw Elk only once, when we visited some dear friends in Conifer, Colorado. They'd placed a salt lick in thier woods to attract the elk, and we were blessed to witness them early one morning. What a wonder God's creation is!
February 26, 2010 at 11:56 AM

Moll said…
I love these pictures. The make me yearn for open space, scratchy wool blankets, and a fireplace.
February 26, 2010 at 2:24 PM

Midlife Roadtripper said…
It is most beautiful, but I don't think I could survive a summer of snow, too.

Southern Girl said…
Gorgeous, gorgeous, gorgeous. These pictures take me to the source--I felt like I was right there in that window, too. (I suppose that's what blogging is all about, but I never get used to being whisked off to others' beautiful worlds.) Thank you!!! :)
March 9, 2010 at 6:34 AM