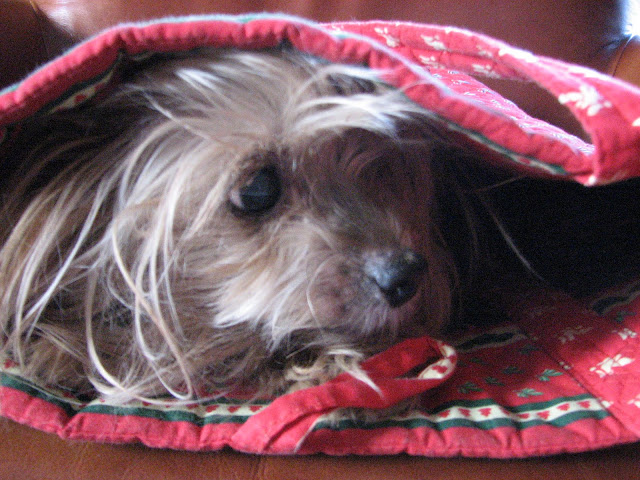 This morning my first and most precious dog, Chloe, passed away after a series of strokes she suffered over the past two days. Chloe was fourteen years old. I got her when she was eight weeks old when I went to a Yorkshire terrier breeder to buy a dog. I'd picked out one puppy that I'd intended to name Cleo and I was sure she was the one I wanted, she was the prettiest of the group. And then I picked up Chloe and when I held her up to my face, she kissed me on the nose. And that was that. She chose me.

And demanded that I change her name.

Chloe has been a world traveler. She drove cross country with me twice, first to Lake Tahoe from Florida, then back to Florida from Seattle. Oh she loved car trips...except that she always demanded to sit up front with the big people. And she loved to fly (though again she demanded that she not ride in her carrier beneath the seat, but in my lap, which more than once got me into serious trouble with the flight crew...Air France take note, Chloe, Suzanne and white wine...), she went with me to Kiev, Ukraine, and then to Baku, Azerbaijan. She's flown first class from Paris to Fort Lauderdale (ahem, beneath the covers of my reclined chair much to the consternation of a not dog friendly flight attendant...oh the French!), walked along the edge of the Grand Canyon, and survived an attack by a German Shepard at a dog show in Kiev.

She is the wisest, smartest, most beautiful dog, I've ever had the pleasure of knowing. Her beautiful coat would make the Housewives of Orange County cry with envy. And her stunning brown eyes never needed any enhancement to get their message across. She would bark to get your attention and continued to give kisses on the nose until the very end. When we were at the hospital and she didn't give a kiss when asked, I understood the doctor's assessment that Chloe was no longer coherent.

Chloe had a wisdom and compassion that first showed itself when her younger brother, Cosmo a rolly-polly yorkie who was the one no one wanted of a later litter from the same breeder, passed away when we were in Baku. At that time, Chloe always slept with me and Cosmo slept with my mother. After Cosmo passed away, Chloe went to Mom's room and slept there to keep her company. After Mom's heart attack, Chloe became Mom's dog and followed her everywhere. When I adopted Coco, another yorkie, this time a young rascal from a disruptive home, Chloe never doubted her alpha position in the family and like a grand dame, welcomed the young upstart.

Chloe's decline was a surprise, but not a surprise given how old she was and her health issues. The surprise was how quickly it happened. When we took Chloe to Evergreen Animal Hospital yesterday afternoon, we met Dr. Tim Ruggles who was incredibly informative and patient with us while we tried to figure out what to do. We did some blood tests which revealed elevated red and white blood cell counts, but really it was a neurological problem, due to either a stroke or a brain tumor and it was clear that Chloe would not regain the use of her legs. Tim gave us our options, including to let her spend the night at the hospital, and when we decided to bring Chloe home he gave us valium for her so she would be comfortable.  When we were at the hospital, Chloe briefly rallied and I thought she was going to be okay. However, by the time we got her home, it was clear that it was just a matter of hours.

My words are inadequate to describe how much I love Chloe, or how much she added to my life. Last night after we brought her home from the hospital, we put her in her bed to rest. At one point I went outside and prayed to Dad that he would welcome Chloe in Heaven when she arrived. The rest of the evening, Mom and I took turns holding Chloe in our laps as she lay in her bed. Later, I was blessed to be able to say good-night to Chloe, to pet her as she closed her eyes and went to sleep.

Helen Ginger said…
This is my first visit to your blog and it's odd that I came today of all days. My dog, Ruffles, died just before Christmas. She was almost 16. I miss her in a way that's indescribable.

It sounds to me as though Chloe was very much loved and she gave an equal amount of love in return.

larramiefg said…
I had a Chloe too. In time she sent me Ana. There are no substitutes or replacements but once you know unconditional love...it will always be yours.

Unknown said…
Hi Suzanne. I am so sorry to read about Chloe. I wish I had had an opportunity to meet her. Please let me know if/when you are back in Colorado Springs. We don't yet have any animals at Wild Blue Animal Rescue, but maybe when we do, you will be ready to adopt again.
Love
Lauri
January 19, 2010 at 8:01 PM