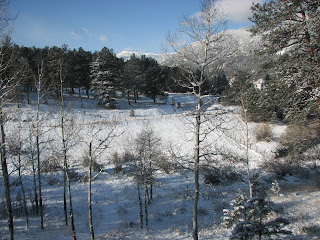 We are now in our second day at our Swedish farmhouse in Evergreen, Colorado. The adventure has just begun but it has already been event filled. We arrived on the evening of the 2nd Dec at 6:30pm with our two yorkies, five pieces of luggage and Mom's walker. The temperature was 10 degrees and it had snowed during the day so the roads were icy. Before we left Fort Lauderdale we were informed that our car and furniture and boxes that we'd shipped ten days prior would not arrive until Dec. 14th, instead of the expected Dec. 4th date we'd been told. This meant that we had to rent a car, in this case, given the weather and our destination of a mountain town we had to rent an SUV, not an inexpensive proposition for ten days.

We loaded up the Chevy Tahoe and started the drive up I-70 to Evergreen, slowly. I hate to drive at night, on expressways, and the last time I've driven in snowy conditions was 13 years ago when I lived in Incline Village, Nevada. This may explain why it took us about two hours instead of one to get home. We finally arrived at 10pm and were greeted by the lovely view of the outdoor spotlights that sit beneath the Aspen trees and light up the house, creating a beautiful scene as we approached. We were too tired to open the celebratory bottle of wine we'd brought, instead simply wanting to go to bed, as it was already midnight back in Fort Lauderdale.

The next day I woke at 6:30am and went downstairs to see the most beautiful view of the mountains in their blue predawn splendour. It was even colder than the night before, six degrees. We spent the day getting our bags unpacked and groceries ordered from the local supermarket which amazingly actually offers home delivery for a nominal fee, a convenience which seemed the perfect solution to avoiding a trip out in the cold.

Our property manager came out to do the walk through and told us that we had to leave cabinet doors open underneath the sinks that were attached to outside walls to avoid frozen pipes. This would be an important, albeit too late, bit of information. When evening came we finally got to open that bottle of wine and enjoyed it sitting in front of the fireplace, feeding the fire with log after log, and the cd player with an endless stream of music since our cable had not yet been set up and we were without tv.

This morning the weather finally turned warmer, we actually reached a high of 32 according to the internet weather forecast, though our outside thermometer read only +20 F. I took advantage of the weather to shovel the snow from the driveway and the outside deck and to bring in more firewood from the stack next to the house. Mom spent the day making a minestrone soup that was to be our dinner tonight. She began by soaking the beans last night and then putting them on to boil around 3pm this afternoon. It's now nearly 8pm and the beans are still boiling and just barely less than rock hard....we've just  received a call from our property manager who just started laughing when I told her this, apparently high altitude cooking and beans do not go together, which is why most people up here resort to pressure cookers. I anticipate we will have soup around 10pm. When I informed her that we'd planned to have pasta tomorrow night, she started laughing again, apparently boiling a pot of pasta can take an hour and a half.

As to why I was speaking to the property manager on a Friday night....remember the admonition about frozen pipes? Well, we took the precaution of keeping the cabinent doors open as advised, and yet as I walked by the front door windows this evening I noticed a waterfall...I ran to the door wondering if it was raining outside. It wasn't. It was a waterfall caused by a leak in the pipe in the upstairs bathroom sink. I ran upstairs to find the floor covered in water. I quickly turned off the water switch and then ran back downstairs to address the flood now making a puddle outside the front door and leaking into the front foyer. Piles of towels and a frantic call to the property manager and a visit from the plumber is scheduled for 'sometime' tomorrow. Luckily the water seems to have stopped dripping.

And just for the heck of it, we are forecasted to have more snow coming in this weekend. I've got the grocery delivery guy on speed dial and an order of wine on the way.
Email Post
Labels: adventures evergreen colorado high altitude cooking mountain living moving

larramiefg said…
Are you snowed in? I heard it was headed your way again. The joys of moving...you should have the kinks worked out by the holidays!
December 7, 2009 at 10:43 AM