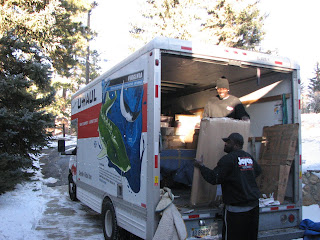 I apologize that it has been so long since my last post. When I last left off the adventure of my move to Evergreen, Colorado, I was waiting for the delivery of my household belongings from Florida.

Before I chose the shipper for my belongings and the transport of my car, I did extensive research of companies via the Better Business Bureau and several online review sites. I eventually chose Joyce Van Lines because they had an A rating with the BBB and few negative reviews. Unfortunately, all my research did not result in a smooth move. Things started smoothly with the pick up of my boxes, furniture, and car. However, after that there were several issues all of which centered around a lack of communication, which led to feelings of frustration and a sense of being taken advantage of. All of this made me so depressed and frustrated at my inability to do anything that I stopped writing here and on my other blog. Eventually, I was unable to work out an acceptable solution with the company and I made a complaint to the Better Business Bureau and to my credit card company. The following is my side of the story. I'm sure Joyce Van Lines sees things differently.

This is the complaint that I sent to the BBB and to my credit card company. Joyce Van Lines responded by saying that they will not pay for a claim I filed for a broken marble topped table until I retract my complaint.


Joyce Van Lines  failed to perform their contracted services for my move from Fort Lauderdale, Florida to Evergreen, Colorado. I was first given an estimate to move 1200 lbs of household goods for $1261. Then when I informed them that I wanted to also transport my car, they said they would move my car in the same van as my shipment for a total of $3000 for goods and car.

1.) When I originally placed the order for service I was told that I could use my American Express card. I was told that they would take my Amex card number, but that no charges would be made to the card until the shipment was delivered. This is consistent with the company policy stated on their website which states that all shipments are COD. Instead they were charged without my knowledge three days after the shipment was picked up. Joyce Van Lines made two unautorized charges to my American Express card. The first was for $3000, which was the original amount contracted for and the second was for $1579, which they claim was for additional furniture, however, I was never informed of the additional amount. They made a second unauthorized charge for extra weight without first informing me of the charge and without providing an official document showing the weight for the total shipment.

2.) As part of the original $3000, $1534 was allocated to move my car inside their moving van. It turns out that it was instead transported by DAS, an outside carrier for $1,030.00 without my knowledge or consent. They also made no attempt to inform me of this fact and I only found out because a DAS key ring was left on my car’s key chain. When I found out, Joyce Van Lines intitially agreed to refund the entire $504 difference and then refused to refund me the difference of $504.00 that I am due since I was overcharged by them for the auto-shipping.

The order for my car to be shipped was placed at the same time that I placed the order for the home furnishings. When the pick up for the car was arranged I was told that the driver was putting it on his truck and it would remain on his truck until it arrived in Evergreen and that all my belongings, which had been picked up days before, would be placed on the same truck and they would all travel together. That is the whole reason I chose to use Joyce Van Lines instead of another auto shipper. I wanted the Hummer to be in a covered truck and that is why I was willing to pay extra and why I arranged for it at the time of the original order. My car went in an open carrier without my knowledge, without their first consulting me to find out if that was acceptable, and it was delivered filthy.

This is now the third incident in which I was not informed of a change in the original service order: 1) the change in delivery window from Dec. 9th to 19th, 2) the charge to my American Express card for the original order and then a second charge for the additional items, for which I was charged with out being informed of the difference in weight or cost between my original order and the additional items, 3) the change in the auto shipping method and charges.

In my original estimate, I was to be charged $1,261 for 1200lbs shipped from Fort Lauderdale, Florida to Evergreen, Colorado. Then, they offered to move my furnishings and car for a total of $3,000. However, if I was being charged $1549 for the car being shipped, this means that I was actually being charged $1451 for furniture, not $1261, which would equate to a greater weight allowance. Additionally, when my furniture arrived, they moved it to a 17 foot U-haul to transport it to my house. I was stunned when they opened the back of the U-haul truck to find that my entire shipment only filled half of the U-haul. This lead me to believe that they grossly overcharged me on the weight of my household goods shipment.


It's times like these that I wish I had a husband or a strong-willed person like my sister-in-law, Heidi, in my corner. Threats from a corporate entity are scary and intimidating. I can only deal with them in the only way I know how, which is to speak out and tell my side of the story.
Email Post
Labels: auto transport Better Business Bureau joyce van line customer service Joyce Van Lines joyce van lines negative reviews joyce van lines owner Joyce Van Lines reviews

Heidi said…
Suzanne, John and I are always in your corner. Stick to your guns. Try this website. The FMCSA regulates intrastate moves. Maybe they can help mediate this mess. Also, if you want to take it further, I'm sure you can sue them in small clains court.
Good Luck from your strong willed sister-in-law!
December 30, 2009 at 3:17 PM