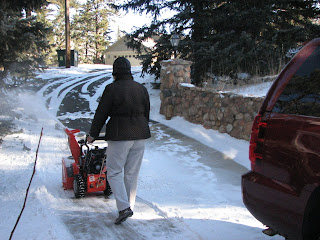 The stunning sub-zero weather that greeted us when we arrived and then stayed on like an uninvited guest for the first week, freezing pipes not once but twice, obliterating my attempts at snowblowing, slipping through the leaky window panes, fighting our attempts to stay warm...that bad old Mr. Frost has left, for now.

In fact, his exit was rather dramatic, through the night a howling wind blew through the trees and banged against our wooden house. As I lay snuggled in bed I thought of the snow drifts it was creating and contemplated how nice it would be if those strong winds blew the driveway clear of the snow that had newly fallen after my first snowblowing adventure.

What a nice surprise it was then this morning when I walked outside and found that the wind had in fact done just that. The driveway was clear of snow of all but the tire tracks of the plumber that had come twice to thaw the frozen pipes. There was only the drifts of snow around my rented SUV to clear with the snowblower, much less work than I'd anticipated (yes that is a picture of me with the snowblower).

And so today I'll venture out and get a PO Box that will in one more symbolic and real sense signal the reality of my move here, and allow me to enjoy all those $5/year magazine subscriptions I signed up for through Amazon.

I love those cheap magazine subscriptions! A great way to cozy up and enjoy the winter.
December 19, 2009 at 8:25 PM

Keetha said…
I'm rather envying you that mailbox full of nice new magazines!

Glad to hear you're settling in.