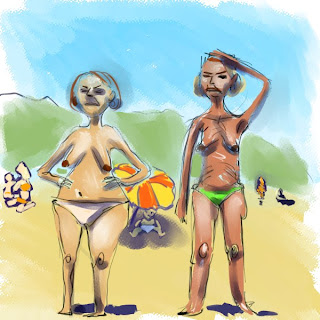 Okay, enough about the big move, the job hunt, the next house hunt, or my never-ending search for meaning. Today let's discuss what's really vexing me....the inexplicable reason why as a grown woman I suddenly turn red-faced and break out in a sweat while standing in the middle of a store having a breezy conversation!?

While we're at it, can we also have a little chat about why it's ten times more difficult to lose weight now than it was when I was in my twenties? That the changing shape of my body when I stand naked before the bathroom mirror is changing the way I look at myself? That I'm beginning to look more like the woman on the left rather than my old self, the woman on the right? That by some freak of irony, middle age means you start developing the voluptuous rounded belly of a fertility godess at the very same moment you start losing your fertility?

Or why I may be mid-sentence in making some very profound point and suddenly lose the entire train of thought? To the extent that my 83 year old mother has to help me out with a forgotten word???

As for the increasingly generous sprinkling of silver hair around the crown of my hair, let's just say that the upside is that my blonde highlights last a lot longer when the roots are a cool new white instead of my natural brunette.

Although I have made traction well into the fourth decade of life, up until the recent onset of these maladies I really didn't feel any different than I did in my thirties. In fact, given my druthers I'd like to just go on pretending that I'm actually still in my thirties for the next twenty years. And that is the crux of it, my mind lives in an ageless vacuum where I remain the same Suzanne I've always been. The problem is that my body has betrayed me. My body sends me these first subtle then embarrassing signals that times are a changing. Perhaps more disturbing than these physical manifestations of the aging process is the fact that more than mere inconvenience, they are a lasting reminder that life is moving inexorably and irrevocably forward. Whether I embrace it or not, my body is telling me that I am no longer in my thirties, nor will I ever be again. And that is going to take an adjustment of how I see I myself and my plans for the future.

I began to write that these changes mean that I will have to realize that I will never know the joys of motherhood. And then I remember, that technically it is still possible for me to give birth, or adopt, or become a step-mother.

I began to write that that this means that I need to realize that I have fewer options, that some doors will close, some dreams must die. And then I remember that my mother was 65 when she first when she first went to work overseas.

I began to write that I must accept the way my body looks and then I thought of all the women that have adopted healthy lifestyles and changed the way they look. Of the good friend of mine who just recently lost 35 pounds at the age of 55.

And then I remembered a page I'd torn out of More magazine and pasted on my vision board last year, if you scroll down to the last post you'll see it, it's entitled "Fame after Forty" and yes, it's a list of women who achieved fame later in life, and the list includes such notables as: Julia Child, Toni Morrison and Mary Kay Ash, all of whom followed their passion and found fame and fortune after well after age 40. (For more stories of ordinary women pursuing their own fabulous second acts, check out More magazine's website: among the terrific articles geared toward saavy 40+ women, you'll find My First After 40, where they feature inspiring profiles of women who have changed their lives as well as tools for transforming your dreams into reality, from starting a business to going back to school.)

So last week I went to the doctor (ahem, yes, that doctor) to see what I could do about it all...after a thorough exam she smiled and said that I could deal with the hot flashes by taking a low dose of hormones or an anti-depressant. And I could deal with the weight gain by eating high protein / low carb / portion controlled meals and exercising five times a week. I turned down the hormones and anti-depressants, but I've changed my diet. I've also started walking every morning and taking vitamins. And guess what? The hot flashes have nearly disappeared, I feel better, and while the weight comes off as slowly as sculpting marble with a plastic fork, it is at least not going up any more. All of which leads me to believe that with more pro-active work on my part, this aging thing might not be so bad, after all. I just have to change the way I look at it.


photo credit: I found the lovely illustration above when googling 'middle age women' images. After scrolling through several pages, I found this clever take on a day at the beach with women of a certain age, which also led me to the blog of Lucy Pepper, an incredibly talented illustrator in Portugal. Please visit her site to see more of her artwork.
Email Post
Labels: getting old hot flashes middle age women tummy weight

Elizabeth said…
Good for you...Vitamins & exercise & portion control are perfect ways to re-vitalize yourself! Remember that when you start ot plateau...change your exercise routine...your body will acclimate after a while to whatever you do...
add something different, or change your speed, etc. The weight CAN come off...without a "biggest loser" boot camp...you can do it!
I lost 50# last year with just that plan...now awaiting the birth of number 4 baby in 11 years (lost 2 to miscarriage) any day and hoping that I can get back on track ASAP. I DO NOT want to balloon up again post partum...
BTW, turned 45 last May!
Pax Christi!
November 17, 2009 at 8:31 AM

bernthis said…
I work out pretty religiously four times a week. I could eat better to be sure but it's good to know that it will help make those hot flashes, well, not so hot. Beautifully written.
November 17, 2009 at 5:45 PM

larramiefg said…
The key is "taking control." Age is a number and the physical effects can be minimal by working at being the best you can be...even early as twenty-something. You're never too young! ;)
November 18, 2009 at 10:35 AM

suzanneelizabeths.com said…
Thank you ladies, the excercise and diet changes really seem to have helped. Tonight I'm heading off to yoga with a friend to burn off some moving stress.
November 18, 2009 at 3:11 PM

Susan said…
Amen, sister. All of my dare I say, middle aged, friends are on the losing weight kick and we are kicking it. So get on the spin bike or walk or jog - and eating right is a big part. You don't have to go to extremes, just be smart about it.
April 8, 2010 at 6:14 PM