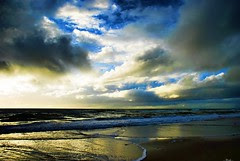 Maintaining my focus. Yesterday I had a conversation with a very dear friend. I've known Mrs. W. since I was eleven and started my swimming career. Her sons were on the same swim team and we attended the same middle school and high school. In the three years since my return from overseas, Mrs. W and I have renewed our friendship and enjoyed getting together once a week at a women's Bible study and a good hour or two of conversation afterwards. This week I informed her that I've decided to move in September, I've chosen that time because I'd like to spend the summer with Mom and because I've always felt that September was a great month for new endeavors and especially lucky for big moves.

Although I've been talking about moving for quite some time now, I believe that putting this date on the thing has made it more real for all of us. Mrs. W, who firmly believes that I should stay put, tried a new tactic this time: I should buy a place on the water here in South Florida, rather than out west, because the depressed real estate prices insured a good investment. Of course, loving the ocean as I do and especially having just spent the weekend by the beach, her suggestion was tempting. I'll even confess that I spent yesterday looking at beachfront condos online....and she's right, there are some real bargains out there. But last night, as I was walking Coco, one of my yorkies, I thought of how I would feel in September. Even from the grand ocean view of a new place I know my heart would be longing for the change of seasons.

So, I know it's time to move forward.