God Has Blessed Us Exceedingly 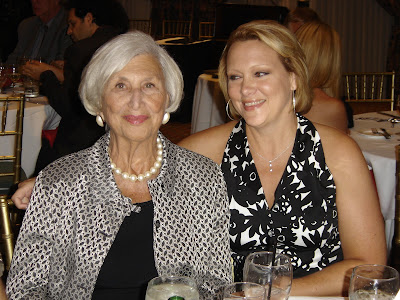 Last night I prepared a new dish for dinner. As part of effort to be more daring, I've challenged myself to try recipes that are a first for me, last night it was stuffed shells with ricotta cheese and spinach. This is not particularly difficult, in fact it was darn easy as well as incredibly tasty with the addition of freshly grated and sauteed garlic. The moment of epiphany for me, and the inspiration behind the title for today's post came when my mother stepped to my side and helped me stuff each shell. Still not impressed?

Then consider this: this simple shared moment represents the culmination of a lifetime's pursuit of a mother-daughter relationship that is healthy and based on mutual caring for one anothers' individuality. Certainly, we have always loved and respected one another, however, like many mother - daughter relationships ours has been fraught with petty jealousy, misunderstanding, differing expectations, and disappointment.

Growing up, I was Daddy's girl. My father took me to swim practice and every swim meet. When I became interested in cooking, my father started collecting cookbooks. He's the one who drove me to college and then sent me boxes of his famous chocolate chip cookies. I was his 'pumpkin'. During these same years my mother and I hardly spoke. She always seemed to be working or pursuing one of her five degrees, which ultimately included two masters and a doctorate in education. Her interest in housekeeping and cooking was nil, in hindsight, I realize it was because she was so busy making a living. But as a child I didn't understand, I only knew that I wanted a mom like my friends had, one that would go shopping with me, create a peaceful house, lead me through the girly things that I was so insecure about as I grew too tall yet remained too flat-chested as a pubescent swimmer, and most of all make me feel secure in her love.

My mother and I have now been living together for ten years, since my father passed away while my parents were living in Kiev and she asked me to join her there. These years have been rocky and more than a few times one or the other wanted to find an exit, the balance of power shifting, boundaries tested when my own behavior was less than stellar and then after Mom's heart surgery when our roles often changed depending on her health. Many years before this period, when I was still living in New York and Mom and I were in one of our 'not talking to you' phases, I went to Mass and prayed to Mary that she, Mother of God, would intervene to heal the relationship between me and my mother. In the years since I have had moments to ruefully reflect on how well this prayer had been answered.

Then, last night as we stood together in the kitchen preparing this new recipe, I reflected on the new peace we have achieved. We have the relationship I dreamed of as a child, but without the desperate co-dependency that it once inspired. We are healthy in mind and body even as we travel this last bit of road together. It is because of this new equilibrium that I can now move away. By the end of the year I will have bought and moved into my new home (Inshallah). Mom will spend some months with me there and some (winter) months at home in Florida. We have found a new peace in our roles as mother and daughter, but also in our mutual need to be recognized as individuals.

So, last night as we worked together, this phrase popped into my head: 'God has blessed us exceedingly'.

JCK said…
It is a blessing when you can feel the blessing.

Yeah on you moving into your new home!!