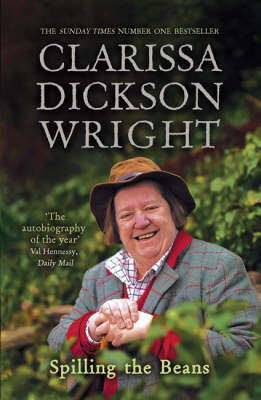 There are moments in my paranoid little mind when I entertain fantasies that some people have all the luck. Their first song hits number one on the charts, they send out five query letters and get offers from five agents (ha!), they marry their high school sweetheart and live happily ever after, no matter what they do, they make it look easy. Which is what drew me to Spilling the Beans.

Last night I finished reading Spilling the Beans by Clarissa Dickson Wright, known here in the U.S. as being one half of the brilliant, hilarious, and enormously popular 90's cooking show Two Fat Ladies. When I read the synopsis on the back cover, I knew I wanted to read the book. Born to a renowned surgeon and an heiress, Clarissa's childhood should have been the stuff of children's fairy tales. Unfortunately, her father was an alcoholic and Clarissa describes years of abuse suffered by her mother and herself as her father's drinking binges progressively deteriorated his mind. Against her father's wishes that she go into medicine, she studied law and became the youngest woman admitted to the bar in England. Her promising legal career was derailed by a series of tragedies, including the untimely death of her mother and a tragic end to a love affair, both of which sent her into a ten year alcoholic binge. She finally found recovery through AA and a new path in life through her love of cooking and food.

What really spoke to me was that discovering her passion, while creating a lifeline and purpose, was not a golden ticket that suddenly made her life one straight path to stardom. First of all, this second act in her life didn't begin until she was well into her 40's. Second, she started small, working part time in a bookstore dedicated to cookbooks, not only because it was comforting to be around things and people who shared her interests but also because it provided a safe harbor in the early years of her recovery. She worked hard to get involved in the local cooking/writing community. When she later attempted to open a bookstore of her own she met with failure and through her life has faced bankruptcy twice. She moved from England to Scotland, before she was able to establish real roots, find not only means to start her own bookstore, but a place to call home. She was eventually 'discovered' and offered the opportunity to create the Two Fat Ladies television series with Jennifer Paterson, but this only occurred after ten years of hard work for little money and long hours....What made it bearable was that she was pursuing her passion, so that the fame and success that came later were certainly wonderful but were the icing rather than the cake.

Her biography reminds me that if we look more closely at those who've found success in life, their success while in some ways attributable to 'luck' may have more to do with hard work, overcoming failure, and doing what one loves....when these qualities are fulfilled, luck finds you.
Before you move off, give yourself a treat and view this little snippet from the Two Fat Ladies at the Dorchester Hotel in London enjoying a Brazilian cocktail made with canshasa:

Keetha said…
I've never heard of this and will check it out.

Have you read Steve Martin's "Born Standing Up"? It's on my to be read list.

Vodka Mom said…
Suzanne- I absolutely ADORED these ladies!! I am going to ask for this book for Christmas. I just loved your post, and the clip is fantastic.

suzanneelizabeths.com said…
Hi Keetha, I haven't read Steve Martin's book, although I think I'd like to go back and read his novel after seeing the movie.

cce said…
This is such an inspiring story...I like the idea of second acts (very much). It's all the hard work and heart ache involved in the making of that second act that has me worried. I will definitely check this one. Sounds terrific.
November 29, 2008 at 3:54 PM

Larramie said…
Luck is found in the opportunities you create through hard work and perhaps that's why those who wait for luck -- rather than work -- rarely succeed?!

I always enjoy your perspective, Suzanne, and am THRILLED to be able to have access again. Thank you.
November 29, 2008 at 6:54 PM