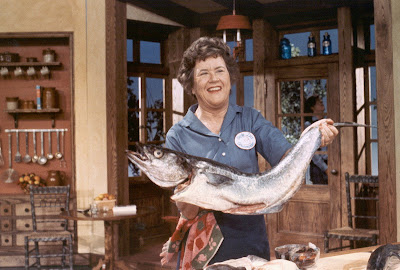 There are so many reasons why I love and admire Julia Child. Learning today that she once worked as a spy for the United States and the Allies during World War II is simply the icing on the cake and an example of a life lived large and right. (Can't you just imagine Julia, her six foot frame, enrobed in a trench coat, a cigarette in one hand, skulking around a dark alley, meeting with her Nazi target, with that booming voice of hers?)

Julia is best known as a pioneer in cooking, bringing French Cuisine to the American public. What is less well known is that she tirelessly worked for over ten years to write and re-write what would become a classic, Mastering the Art of French Cooking (with her partners Louisette Bertholle and Simone Beck) and that the book was nearly never published. Her journey and struggle to write the book, create the cooking show that would become the predecessor and benchmark of every subsequent cooking show, and the rise of the concept and industry of the 'gourmet at home', as well as her marriage to her devoted husband, Paul Child, are all lovingly chronicled in one of my favorite books, a memoir she co-wrote with her grandnephew Alex Prud'homme, My Life in France. If you haven't read it, go do it now, it is a book written with much love.

Below is a YouTube video of Julia doing what she does best, showing us how to make an omelette. As you watch it, note the difference between her demonstration and the modern cooking shows on the Food Network. What struck me was the amount of quality information she brought to the education of the at home cook, she not only demonstrated how to make this simple dish, she explained every step and technique, even why she chose one pan over another. Julia is my hero because she discovered her passion and then pursued it with single-minded determination and devotion. That to me is the common denominator among all remarkable people. It is also a lesson in how to live well.

So here's to you Julia, thank you for living a remarkable life!

Keetha said…
Indeed - she had such passion for life and seemed to always feel luck that she was doing what she loved.
August 15, 2008 at 8:56 AM

Larramie said…
You hadn't heard the whispers of Julia's spying efforts before now, Suzanne? Quite frankly, what a great recruit that was!
August 15, 2008 at 11:55 AM

Gypsy at Heart said…
I know what you mean. I loved her already and now? I just love her more. Have nearly all her books in my cookbook collection.
August 16, 2008 at 5:37 AM

Gypsy at Heart said…
And on a completely unrelated matter, I meant to tell you about this site and forgot. For if you don't know it - http://plotdog.com/woof-contest/
Hope you find something there to interest you.
August 16, 2008 at 5:58 AM