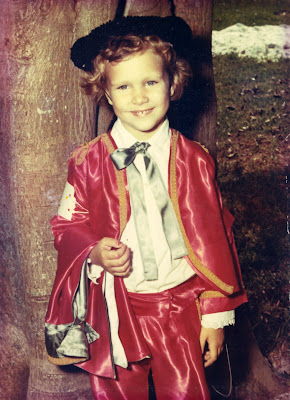 Have you ever come across a picture that was taken years, or decades, earlier and wondered at the person (you) pictured there?

This is me, at the wizened old age of four....the occasion was a Halloween costume parade at school. I came as a matador.

This morning I was looking at this picture and wondering at how life has changed in the intervening years....at what age do we first begin to wonder what our future will hold?

It was probably not at this age, although I do remember that around this time I imagined myself as a Joan of Arc figure riding off on a horse in some medieval battle scene that may or may not have involved dragons and a king. This fantasy might have had something to do with my father's propensity to play classical music when we went anywhere in the car.

I think it was later, though, that I had my first dreams of what I wanted to be when I grew up. I know that I fell in love with books at a very young age and spent countless hours escaping from the world around me into the more vivid world of Hans Christian Andersen fairy tales.

In second grade, I went through a phase in which I read every biography in our elementary school's small library. Was this the precursor of the 'search for self' or the exploration of future identities? Or was I simply curious about how others lead their lives?

I began writing stories at an early age...my first, an illustrated picture book completed around the age of six, was about a grasshopper.

In middle school, I wrote a short story about a Medusa- like character that I then narrated and produced as a one-person play by putting a tape recorder into a shoe box, propping a wig head covered in aluminum foil with pipe cleaners sticking out of the skull, on top, and playing the thing for my classmates.

In high school I fell in love with Haiku style poetry and had several published in our school's literary magazine. But from there my literary career seems to have faltered.

I went away to college feeling the need to be practical to pursue a career that provided the assurance of a regularly occurring paycheck. I followed my high school interest in the stock market to a career on Wall Street. From there I went on to have careers in corporate finance, in teaching, in commercial real estate. Still from time to time I dabble in my first love of writing. I wonder now if I should not have let it go so easily, if I can still capture that dream.

My point is this: Have you ever looked at a picture from long ago and wondered, how did I get from there to here?


As we move from day to day, from one decision to the next, we see only that next step along the path, not their cumulative effect upon the course of our life. But from a distance, looking back from here to there, to that picture of a little girl....have I made all the right moves, have I been bold enough, taken enough risks, and where should I go from here?

Between the idea
And the reality
Between the motion
And the act
Falls the Shadow
T. S. Eliot, The Hollow Men
Email Post
Labels: childhood dreams life

Anonymous said…
Oh my goodness, does this post speak to me. I have a picture of myself, about 7 years old, stuck in a giant oak tree that I hade climbed barefoot. I keep it next to my bed, to remind myself of the daring, adventurous and down-to-earth (even though I was way too high up in that tree!) girl that I was then. I still want to be that girl. Badly. But on days when I feel I'm so far from her, I am reminded that my own daughters are the second generation of my 7-year old self. It forces me to work a little harder and being in touch with my childish self... Thanks for such a nice reminder to step in and play more... Love the way you write, it always gets me thinking...
May 1, 2008 at 5:34 PM

Keetha said…
I'm with Melissa - this post does make you think. What great questions to raise and ponder.

Carolyn said…
Wow wow wow wow wow. This post was excellent. It touches on exactly what I've been pondering lately. In fact, I've been writing a post like this in my head for about a month now, and I was planning on actually trying to write it tonight. Great stuff. Thanks for getting the ideas flowing.

Jennifer S said…
I love that quote, too.

Yes, I've done the same thing, with an old photo. I always seem to come at it from the angle of, "If I knew 15 years ago how things would turn out..."

I loved reading this timeline of your creative and literary life. All the best with whatever your next step is...can't wait to hear about it!
May 2, 2008 at 10:12 PM

laurie said…
when i see old pictures like that i am immediately plunged back into childhood. i think i remember exactly what was going through my mind at the time. those old photos are very powerful.
May 3, 2008 at 1:47 PM