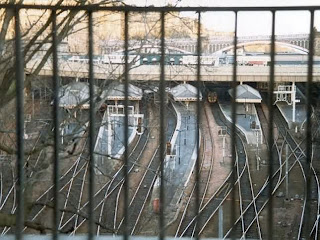 I have revised the opening chapter of the soon to be re-named Silver Cord (ironically, I am actually toying with the idea of titling it "Here" - however, I am also taking suggestions for new titles!), and present it below:

“Alysha get back to the sidewalk with Lillian!” Turning from where I was desperately trying to hail a taxi, I watched my young niece run into the street. Tires squealed and horns blasted. Following Alysha, Lillian stepped directly into the path of a car. The front fender grazed her, spinning her in slow motion. I shared her helpless vertigo as the world spun before my eyes, and sky and buildings and pavement swirled like a tumbling house of cards.

Lillian fell with the pageantry of a well-dressed bundle of sticks, the blue silk of her ball gown parachuted, revealing spindly legs covered by stripped flannel pajama bottoms. She landed on the road in a heap of colorful fabric. My poor, delusional sister, dressed for a night at the opera, on the morning that held our last chance of escape.

“Lillian, where does it hurt?” I murmured. My hands frantically groped through the yards of fabric to feel for broken bones. Alysha knelt next to Lillian, wiping blood from her forehead, while I cradled her head in my lap.

“Why don’t you look where’re you’re going!” yelled the driver over the blaring
horns of the stalled traffic.

“Look at my dress!” Lillian moaned. “Henry will notice the stain on the skirt.”

“He’s too much a gentleman,” I assured her. Looking up, I yelled at the driver of the car. “We’re going to the train station. You have to take us.”

He threw his arms up in the air. “Because this crazy woman ran in front of my car?”

“Please, we have to catch a train.”

Cursing, he slammed his fist on the hood. “Get in the car.”

Alysha and I lifted Lillian to her feet and helped her into the back seat of the car. The driver pulled back into traffic, lurched around a corner, nearly sideswiping a delivery truck attempting the same corner from the opposite direction.

“Katherine, how much time do we have?” Alysha asked.

I checked my watch. “Ten minutes.”

“You’ll never make it.” Still, he accelerated, but then threw on his brakes as another car swerved in front of him. He retaliated, cutting off the car in turn, while gesturing wildly and swearing.

“What’s wrong with this driver?” Lillian asked. “This isn’t the way to the Opera House.”

He swore again and the car leapt forward. As we turned the corner, I saw a sliver of our beloved river, the silver pathway that bisected our city, and the Parliament building, which sat on the river’s edge like a fat wedding cake. I shivered as I noticed the tanks that circled it like a line of hungry rats.

Alysha leaned forward to look out the front window. “Katherine, Momma wouldn’t let the train leave without us.”

“She said we could take a later train.” Alysha turned to me, her enormous blue eyes revealed her doubt more profoundly than her words.

The driver looked at me through the rear view mirror and raised an accusatory eyebrow.

“Lillian, how are you feeling?” I asked.

“I have an awful headache.”

“What were you thinking, walking into the street?”

“That’s where you were.” she smiled up at me. “You know, we’re going to miss the first curtain. I hope Henry will wait for us.”

The traffic piled up and finally stopped. We were losing time. The train station was three blocks ahead.

“Alysha, grab our bags, we’ll have to run the rest of way.” I opened the door and helped Lillian to her feet. I handed the driver a wad of bills. “Thank you.”

We hurried through the stalled traffic and throngs of pedestrians. Three ragged looking children running against the current surrounded us. With cunning smiles, one stretched out a hand as another surreptitiously tried to find an entrance into my purse. Lillian cried out as a young boy grabbed her coat. I slapped him away. Instinctively I clutched the lapels of my coat shut. Shoved from side to side, we slowly made our way forward. Pushed out into the street we moved between stalled cars. I clutched Lillian as her feet slipped on a patch of worn ice. Alysha was steps ahead of us, looking back from moment to moment, urging us to keep up with her. Finally, we crossed the last street before the train station.

It took a moment for my eyes to adjust to the gloom of the cavernous main hall. Our shoes slid against the slick marble floors. We stumbled over suitcases and bags tied together haphazardly with twine. Old women sat along walls clutching their grandchildren in one hand and their meager belongings in another. Men in military uniforms paced listlessly waiting for orders. Beggars, limbs missing, were propped against the steps, like discarded luggage. We slogged our way through the main hall toward the stairs that lead to the train platforms. To our left, we passed a waiting area, shrouded in darkness, in which rows and rows of benches were crowded with silent, hopeless souls.

“Katherine,” Alysha yelled pointing to a sign overhead. “The train is on track three.”

“Go!” I shouted. “We’ll meet you there.” I watched as Alysha disappeared into the crowd. I cupped my sister’s face and forced her to meet my eyes. “You must help me. We’ve got to get to the train track.”

For a moment, lucidity glimmered. “Yes, let’s go,” she whispered. We locked arms. Swept into the current of bodies pouring toward the entrance to the tracks, we struggled to keep up.

On the tracks, an explosion of cold mixed with the fetid stink from the terminal.

The noise level rose to a roar. A mob surged with desperate energy. Shouts from train conductors fought the outraged passengers with useless tickets. Fights broke out as people clawed and shoved their way onto to over-crowded trains. Above all, the monstrous hiss of engines and bone-crushing scrape of metal against metal heralded the trains’ gathering departure. My frustration and fear mounted at the impossible task of holding onto Lillian while watching for Alysha. I grabbed a conductor, “Where’s the train to the Frontier?”

“On the left,” he shouted. “It’s leaving,” I grabbed Lillian’s arm, leaned forward using my shoulder to wedge an opening in the throng.

“Alysha! Margaret!” My shouts were swallowed by the cries of my neighbors. I saw the train and continued pushing until I reached an open space just along the edge of the platform. I had to lean against the crowd to avoid falling onto the tracks. Ahead, I saw Alysha arguing with a conductor as she tried to get onto the train. I used all my strength to push toward her.

“My mother has my ticket! Let me on and I’ll get the ticket from her.” She attempted to push past the conductor.

He shoved Alysha back onto the platform. “This train is full.”

The train shuddered, lurched forward and back. A loud shriek of steel and steam, and I watched in horror as it inched forward.

“Please let me on,” Alysha cried, skipping sideways to keep pace with the train. “My mother has my ticket.”

Alysha’s eyes searched the length of the train and then she sprinted. She stopped half-way down the car and then started trotting to keep pace with the slowly moving train. She pounded on a window of the train, “Momma!”

The window opened and Margaret leaned out. “Alysha, how did you get here?”

Alysha’s outstretched hand grasped the tips of her mother’s fingers. “Momma, give me my ticket.”

They were moving too quickly now. I ran to catch up, spellbound by the macabre drama. Margaret looked at me and yelled, “Take her home. It’s too late!”

“Why?” Alysha cried. Margaret glared at me and then at Alysha.

“Tell her Margaret! Tell her!” I shouted. “There never were more than two tickets!”

The wind whipped the hair across Alysha’s twelve year old face as it crumbled in anguish. “Momma, please don’t leave me.”

Margaret looked at her daughter and then closed the window, her face pained, but defiant.

“Please Momma, I love you!”