"Good morning, Pooh Bear," said Eeyore gloomily. "If it is a good morning," he said. "Which I doubt," said he.
"Why, what's the matter?"
"Nothing, Pooh Bear, nothing. We can't all, and some of us don't. That's all there is to it."
"Can't all what?" said Pooh, rubbing his nose.
"Gaiety. Song-and-dance. Here we go round the mulberry bush."


- Image and quote thanks to Winnie-Pooh.org


Remember when WWJD was all the rage? Every kid on the block had a colorful rubber bracelet with those initials, which stood for: What Would Jesus Do?, a potent reminder to consider what the Savior would do if He were in a similar situation. I like to imagine that this slogan was meant to inspire us to act in a manner that would be pleasing to God, but it might also be a reminder for us to act in a way that was consistent with our best selves, if we are indeed children of God.

A few weeks ago, when I was feeling rather Eeyeore-ish and discouraged by the glacial progress of the job hunt (why does no one want to hire me?), novel writing (does this story even have a plot?), home search (is it Evergreen or somewhere else?) I had an epiphany.

For a brief moment I imagined an idealized version of myself living the life I wanted, where everything had fallen perfectly into place, where instead of feeling discouraged I felt confident, where instead of being turned down for a job I was doing my perfect career, where instead of wondering where to live I knew exactly where to go. I savored that happy image and then I thought: what if every morning I got up and asked, "What Would Happy Suzanne Do?" Then I thought of specific tasks for each day that I would accomplish with a positive attitude, not worrying about the outcome, simply getting the work done with the best intent. Instead of perceiving a rejection as another indication that I (Eeyore) am a loser, I would ask 'what can I learn from this, how can I improve my performance next time?' For example, when a proposal I'd made on elance.com was rejected, instead of telling myself that this was a sure indication that I would never get hired, what if I said to myself, well there were other people who were also rejected, and the person who was hired bid less than I did, or maybe they wrote a better proposal. So, next time I will improve my proposal and bid lower if I want.

I know, I know, this sounds like some feel good, 'I'm okay, you're okay' blather. But it turns out that there is scientific evidence for the benefits of using learned optimism to improve our outlook and therefore our performance and enjoyment of life. Last week while perusing the shelves at the thrift store, I picked up a copy of Dr. Susan Vaughan's book Half Empty, Half Full: Understanding the Psychological Roots of Optimism. In it she describes how our internal predisposition to pessimism or optimism colors our perception of external events, like success or failure. Based on studies with laboratory rats and examples from human case studies, she demonstrates that people who have a pessimistic outlook believe that failures are their fault and are destined to be perpetuated and success is discounted as a fluke. Whereas optimists see failure as external to themselves (and their positive self image) as temporary, something to be overcome the next time, when success is ultimately expected. Dr. Vaughan believes that negative outlooks become hardwired in the limbic areas of our brains, but through sustained positive thinking practice can be changed. While this book was originally published in 2000, since then several other books in the theme of 'positive psychology' or the 'science of happiness' have been published, each substantiating and offering hope that as we change the way we perceive the world, our actions, and therefore our outcomes will have more positive results.

From a practical standpoint this makes sense: if you are pessimistic, you're more likely to give up sooner, believing you are destined to fail. On the other hand, if you are an optimist, you see yourself as a winner and therefore are more likely to stay with a task and modify your approach until you find a way to succeed because you believe that that outcome is as inevitable as the pessimist believes his failure. In other words, "As you think, shall you become" a quote attributed to Bruce Lee (though I think there's a similar quote in the Bible book of Proverbs).

I have made WWHSD my mantra. Although I've always considered myself an optimist, I also realized that my core sense of self carried negative expectations to every endeavor. And quite frankly I am  tired of that burden. While I will always adore Eeyore, I've decided that I want to change my outlook on life. It hasn't been easy, just this morning in bed I started to cry as I wallowed in some negative thought. Rather than stay there and sink deeper into brooding, I got out of bed and got to work. And I immediately felt better. That's what Happy Suzanne would do.

Wishing you all a Happy Easter, remembering the sacrifice of Christ for our sins, and His resurrection that speaks to the new life that we can all embrace. 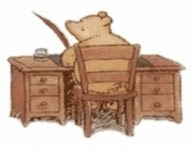 Anonymous said…
Ho! you've opened a whole Pandora's box here - in a good way! Reading about positivity really helped me through the past year. There are scholls of thought such as the law of attraction, that says this actually drives what happens to you. But as a coping mechanism, this approach is one I wish we taught all children in school. FAke it until you make it, actually seems to work, according to the scientists...good work, Suzanne. Very good work.
April 1, 2010 at 5:03 PM